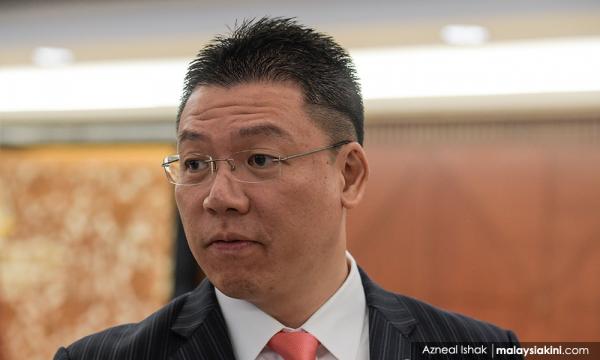 Nga Kor Ming is no stranger to being accused of making racial remarks, but it appears that the latest image circulating on social media had hit his raw nerve.

In a Twitter posting this afternoon, the Perak DAP chief, who would normally dismiss such allegations as fake, went a step further.

Nga warned of divine retribution for those who created and circulated the image.

Describing the image as “disgusting”, the Teluk Intan MP said he has filed a police report regarding the matter and tagged the Malaysian Communications and Multimedia Commission ( MCMC).

The image which incensed the DAP leader had a photograph of him with his arm raised next to the words “Melayu Puk***k” and stated it was a Pakatan Harapan ceramah in Kampung Simee in Ipoh Perak.

Below the image, the caption read: “This is the racist attitude of DAP leaders. They have sown hatred which has led to the Chinese hating Islam and the Malays.”

In November 2017, Umno Youth and Jaringan Melayu Malaysia (JMM) filed a police report against Nga for allegedly using harsh words and making racist statements during a ceramah in Kampung Simee.

Among others, the Teluk Intan MP was accused of labelling then Perak menteri besar Zambry Abd Kadir as “Melayu puk***k.”

However, Nga denied this. He claimed that a video recording of his speech was edited and lodged a counter-report on the matter.

The latest image comes amid DAP veteran Lim Kit Siang complaining about Harapan's adversaries utilising fake news and hate speech to create distrust towards the coalition and divisions amongst the races.

Since the last general election, DAP has found itself in a Catch-22 situation with regard to certain policies and decisions by Prime Minister Dr Mahathir Mohamad's administration.

While Umno and PAS accused it of working to undermine Islam and the Malays, MCA and DAP's supporters have claimed that its once vociferous leaders are now silent on issues affecting non-Muslims.