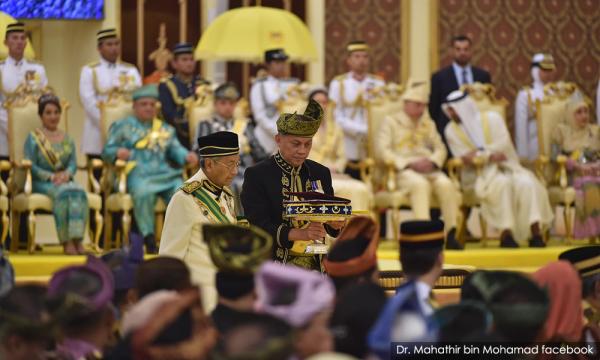 Prime Minister Dr Mahathir Mohamed today said the government is committed to rehabilitating the country and liberating it from corruption and abuse of power.

He said this was being done by strengthening the country’s administration based on the rule of law principle and separation of powers as enshrined in the Federal Constitution.

“I hope the country will be fully liberated from all forms of corruption so that a 'New Malaysia' can be further developed, more than ever before.”

He said this in his congratulatory speech at the investiture ceremony of federal awards and honours in conjunction with the official birthday of Yang di-Pertuan Agong Sultan Abdullah Sultan Ahmad Shah at Istana Negara here.

Mahathir said the government would always respect and defend the sovereignty of the institution of constitutional monarchy, the position of Islam as federal religion, special privileges of the Malays and bumiputera in Sabah and Sarawak, as well as the rights of other races as stated in the Federal Constitution.

The prime minister also said that the government was aware of the economic uncertainty and the increasingly challenging global geopolitical system, including the many barriers to free trade, as well as global currency instability, which could affect the country.

As such, he said the government had drawn up various strategies at both national and international levels in its bid to overcome all the challenges.

Mahathir also said that the government efforts to rehabilitate the country’s financial position and economic performance, as well as to fulfil its promises to the people, had begun to bear fruit.

At the same time, he said various initiatives under the Shared Prosperity Vision 2030 had already been implemented to ensure that the nation's wealth could be distributed more broadly to stimulate economic growth and increase the people's income.

Meanwhile, Mahathir said the 62nd National day celebration on Aug 31 with the theme ‘Sayangi Malaysiaku: Malaysia Bersih’ had brought the unity and solidarity of the multiracial people in the country into prominence.

He said that also proved that Malaysians can come together and share a common value in a very harmonious way regardless of their race, background and beliefs.

“This is also a manifestation of Malaysian unity which will be preserved and further strengthened. Needless to say that all development programmes and projects can only be successfully implemented if the country is peaceful and well organised.

“The people are more mature now in facing threats to unity. The government, however, will continue strengthening national unity and discharging its duties to preserve racial harmony,” he said.

On the national development agenda, Mahathir said the government would continue to engage the young people and instil in them the spirit of volunteerism, entrepreneurship and good values so that they would be more productive and competitive in the face of the fourth Industrial Revolution.

In pursuit of the modernisation, he said the government would also continue to ensure that the environment would be protected and not neglected.

“Those responsible for environmental pollution will definitely face stern action and to prevent such incidents from recurring, all quarters have been called upon to play a better role in protecting the environment,” he said.

“On behalf of the government and the people, I pledge to give our undivided loyalty to the king. May Allah bless His Majesty, as well as the Raja Permaisuri Agong and the whole royal family with His Taufik and Hidayah, long life, good health and lasting well-being,” he added.

PM: Gov't will defend constitutional monarchy, rights of all M'sians

795 conferred with awards in conjunction with Agong's birthday

There are lines in politics that must not be crossed, Agong says