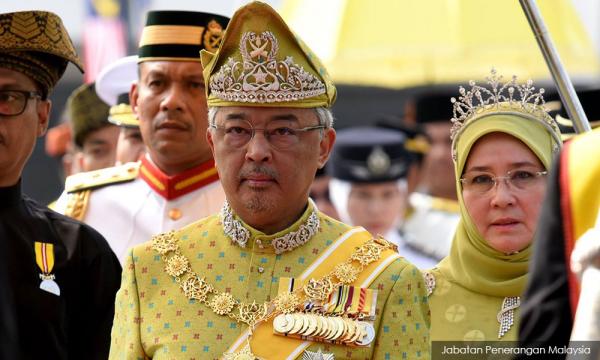 Yang di-Pertuan Agong Sultan Abdullah Sultan Ahmad Shah has called on Malaysians to stand tall as a nation that transcends all differences to create lasting unity and togetherness.

His Majesty said to create such an atmosphere, the people and leaders at all levels should not just do nothing and yet dream of achieving success.

On the contrary, the king said, concerted efforts should be taken to break down elements that would hinder the unity.

Sultan Abdullah said this in his royal address in conjunction with his official birthday celebrations tomorrow, broadcast live on all television stations tonight.

“The fact is that it is not an easy task to manage the divisions and differences that exist in a country. This is due to the fact that every single thing will tend to be viewed and interpreted from different angles,” the king said.

As such, Sultan Abdullah said, ever since taking his oath as the 16th Yang di-Pertuan Agong on Jan 31, he has travelled to every corner of the country to stay close to all Malaysians regardless of differences.

“Through this approach, I learn that every single Malaysian has a role in contributing to the development of a sovereign and independent nation.

“In fact, the most important thing I learn is that every Malaysian truly loves this blessed country,” said Sultan Abdullah.

His Majesty said that Malaysians already had the strong foundation and spirit of unity that only needed to be nurtured so that it could serve as the force to withstand all obstacles.

In conjunction with the official celebration of his birthday tomorrow, Sultan Abdullah invited leaders from all walks of life to put aside the differences to serve the people in efforts to establish a harmonious and united society.

“Insha Allah, I and the Raja Permaisuri Agong (Tunku Hajah Azizah Aminah Maimunah Iskandariah) will continue to inspire and reach out to the people regardless of their rank, degree, lineage and races in achieving a unified vision that is a crucial ingredient in shaping civilised society,” said His Majesty.

Sultan Abdullah also called on all Malaysians to continue to uphold the constitutional monarchy, the parliamentary democracy system and to adhere to the principles of the Rukun Negara.

His Majesty also expressed his gratitude for the congratulatory wishes and prayers he received in conjunction with his official birthday.

“I believe, the support and kind thoughts received from the people and various parties, show that the practice of the constitutional monarchy has a very significant role for the people and the nation,” he said.

His Majesty also thanked the government, members of the administration, civil servants and security personnel who have contributed to the nation’s well-being.

“In particular, I and the Raja Permaisuri Agong would like to thank all Malaysians who have always welcomed our visits with open hearts and minds.

“I and the Raja Permaisuri Agong will pray for all Malaysians and our beloved country to remain safe and prosperous and under the protection of Allah Subhanahu Wataala,” Al-Sultan Abdullah said.