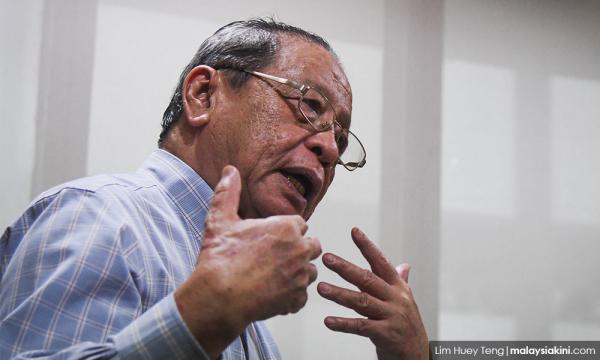 Continuing his campaign against fake news and hate speech, Lim Kit Siang revealed that he received two letters yesterday, one in Chinese and the other, penned in English.

The DAP veteran said both letters were replete with venom and invectives, the hallmarks of those behind fake news and hate speech.

The Chinese letter, among others, accused the Iskandar Puteri MP of being a “running dog”, “charlatan” and “shameless political cheat.”

According to Lim, this was in stark contrast with the allegations hurled against him in the past.

“As for the past half-century, I had been falsely accused of being anti-Malay, anti-Islam and being a Christian, a communist even a relative of (late Malayan Communist Party leader) Chin Peng.

“I was even accused of being Mahahir's puppet-master. Now I have become a running dog and a charlatan betraying Chinese and non-Muslim rights and interests.

“But this is the stuff of fake news and hate speech to incite inter-racial and inter-religious suspicion, doubt, animosity, fear and hate in Malaysia,” he added in a statement this afternoon.

Apart from the letters, Lim also pointed to a canard on Facebook claiming that the DAP leader never furnished proof of being born in Batu Pahat, Johor.

The post pointed to the claim that the 78-year-old politician was born in Fujian, China and came to Malaya at the age of 16.

“It is such fake news and hate speech which dominate the social media in the last two months to incite doubt, suspicion, animosity, fear and hate in plural Malaysia by pitting race against race and religion against religion, which are responsible for the ridiculous situation where each ethnic group believes that it is facing an existential threat of its ethnicity, religion and culture,” said Lim.

“If this spiral of fake news and hate speech to incite doubt, suspicion, animosity, fear and hatred against other races, religions and cultures is not stopped, it could have only one end – racial and religious conflagration in Malaysia,” he warned.

A recent example, Lim said, is the call on social media to boycott non-Muslim products.

“Malaysians should unite and compete with the rest of the world, instead of fighting among ourselves,” he added.

Proponents of the campaign, however, have denied the existence of a boycott, claiming that the campaign was conceived to support bumiputera products.

Meanwhile, Lim urged all Malaysians to speak up for national unity as well as to condemn fake news and hate speech on social media.

“In the past two months, 'social media Malaysia' seems to have developed a life of its own – giving a false picture that centrifugal forces in Malaysia are having an upper-hand and tearing Malaysia apart as a result of the worst racial and religious polarisation in the nation’s history.

“But this is a false picture of the real Malaysia.

“Instead of inter-racial and inter-religious doubt, suspicion, distrust, animosity, fear and hatred, as propagated by 'social media Malaysia', I find on the ground only goodwill, understanding, harmony and tolerance among Malaysians, whether Malays, Chinese or Indians.

“I call on Malaysians regardless of race and religion to prove 'social media Malaysia' wrong,” he added.