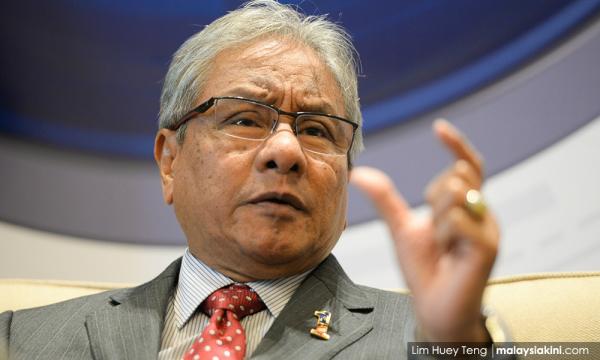 Gov't takes possession of RM100k from ex-minister over 1MDB

UPDATED | A sum of RM100,000 from former minister Hasan Malek's (above) bank account is now officially government property after he did not contest the forfeiture.

The government had initiated the forfeiture on grounds that the money he received from former prime minister Najib Abdul Razak had originated from 1MDB.

Kuala Lumpur High Court judge Mohamed Zaini Mazlan made the ruling after DPP Mahadi Abdul Jumaat, who is attached with the MACC, informed the court that Hasan had made a representation that he wants to return the money, according to Bernama.

"The respondent did not reply to the affidavit and no third party is present today (to claim the money).

"We apply for all the money to be forfeited to the Malaysian government," Mahadi told the court today.

Hasan's lawyer Muhammad Iqbal confirmed that his client did not object to the forfeiture.

Mahadi said the applicant (Public Prosecutor) had filed an affidavit on Aug 23 and told the court that no third parties claiming any interest in the money frozen from the three entities had appeared in court.

“The gazette notification for third parties was published on July 24 for all respondents (three entities) and no third parties are present," he said.

Judge Mohamed Zaini also set Sept 27 for the applicant to send in written submissions and Oct 18 for the respondents to send in their replies.

The application for forfeiture was made under Section 56(1) of the Anti-Money Laundering, Anti-Terrorism Financing and Proceeds of Unlawful Activities Act 2001.

MACC chief commissioner Latheefa Koya told a press conference recently that the prosecution filed forfeiture applications against 41 respondents in a bid to recover about RM270 million related to 1MDB.

She said MACC acted under the Anti-Money Laundering and Anti-Terrorism Financing Act as it believes the sums concerned were actually 1MDB funds transferred from the account of former prime minister Najib.