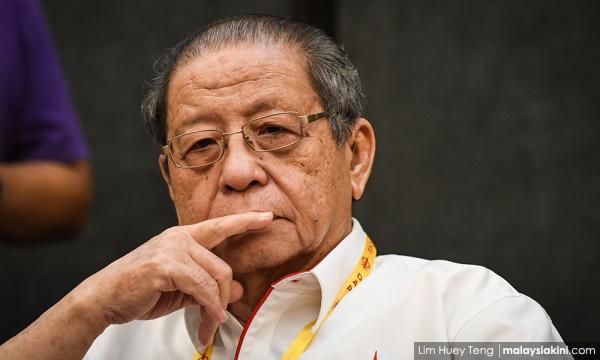 Kit Siang: Should I just forget about New M'sia and quit?

Amid the declining confidence among its supporters, Lim Kit Siang has noted the calls for him to throw in the towel after five decades in politics.

“Shall I just forget about New Malaysia and call it quits?” he asked.

Citing its decades of struggle and sacrifice, Lim vowed that DAP would not break the people's faith nor turn its back on its principles as well as the hopes and objective of a New Malaysia.

However, the veteran politician said DAP needed time for the people to realise this and urged the party's leaders to have the stamina, perseverance and commitment to stay the course.

He reiterated that if a general election is held now, he would be defeated in the Gelang Patah parliamentary seat and DAP would lose 30 to 40 percent of its votes nationwide.

“This is the extent of the misperception and misunderstanding about DAP and Pakatan Harapan among our long-standing supporters.

“We need time for our supporters and the people to realise DAP has not betrayed them and we have not given up on our hopes and objective of a New Malaysia of unity, freedom, justice, excellence and integrity.

“If DAP had, in fact, betrayed the people and the hopes and objective of a New Malaysia, then DAP deserves to be rejected by Malaysians and there is no way that DAP can recover or recapture the support of the voters with the passage of time. In fact, the outcome can only be worse.

“But if DAP had not betrayed our principles and the hopes of the people, then time will demonstrate how wrong were the misperceptions and misunderstandings about the DAP,” he added.

To illustrate the trust deficit in DAP, Lim quoted a comment in response to his previous statement that Harapan could win the 15th general election in 2023, which claimed that the party's leaders have become deaf, blind and dumb.

The Iskandar Puteri said within a span of two months, Malaysians have become entrapped in a vicious position where every community lives in fear, doubt, suspicion and even hatred of other communities and religions, believing that their rights, ethnicity, religion and culture are facing an existential threat.

Lim blamed this on a massive and orchestrated campaign of fake news and hate speech.

“How could this be possible. The Malays are made to believe that they had lost political power and their rights, ethnicity, religion and culture are facing an existential threat.

“For instance, the recent Kuala Lumpur International Airport (KLIA) system malfunctions were used to spread alarm and fear that three million Chinese nationals have entered the country, changing the demography in the country, when there is completely no basis for such fake news as the process of inspecting the entry of foreigners was conducted by the Immigration Department manually, and all visitors had to follow terms according to the standard operating procedure (SOP).

“In any event, a little thought would show that it is just impossible for three million Chinese to slip through the KLIA in three days, which would mean over 10,000 aircraft landing in one day. Could this be done without anyone noticing?” he asked.

Lim said Chinese Malaysians, on the other hand, feared that their rights, ethnicity and culture faced an existential threat.

On this note, he was grateful that Youth and Sports Deputy Minister Steven Sim managed to nip the latest scare in the bud with regard to the claim that the Harapan government was restricting lion dance performances.

“In just two months, through fake news and hate speech, political opportunists and desperados had fanned racial and religious insecurities in each community into a powder keg of distrust, fear and hatred of other communities,” he added.

Nation-building in a quandary

Lim rued that Malaysian nation-building has been in a quandary the last 16 months after the 14th general election.

“Let every Malaysian ask this question: If every community, ethnicity and culture is facing an existential threat, who is creating these threats country?”

“I believe in a New Malaysia that can become a top world-class nation in various fields of human endeavour as four great civilisations – Islamic, Chinese, Indian and Western – meet in confluence in Malaysia,” he added.

Lim also cited a recent survey commissioned by Malaysiakini, which found that about a sixth of Malaysians said they do not know about other religions and cultures, and have no interest in learning more.

“Nearly a quarter of respondents said they were unfamiliar, but willing to learn, while the remaining 60 percent say they are either very familiar or somewhat familiar.

Lim said if Malaysians are committed towards achieving this, then they must come out of their respective ethnic shells and enclaves.