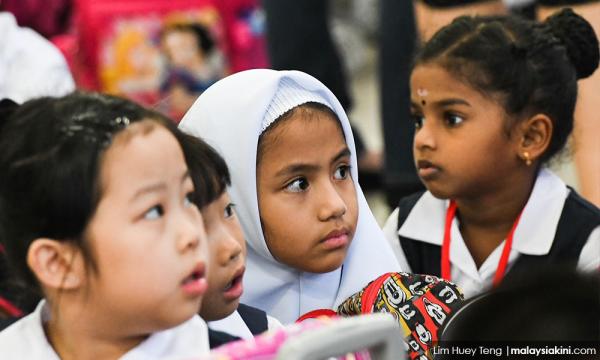 The Parent-Teacher's Associations (PTA) of three schools, part of the USJ15 Vision School complex, have defended the concept despite criticism about its effectiveness in fostering unity.

In a joint statement, the PTAs said they believe the Vision School concept can fulfil the aspiration of shaping inclusive minds in a diverse society.

They were responding to a Malaysiakini report quoting former SJK(T) Tun Sambathan PTA chairperson S Murali, who served from 2005 to 2012.

Murali had said the concept to promote unity was only superficial because the three schools, while sharing facilities, still held events separately.

An example during his tenure, he said, was Sports Day being held as a contest between schools rather than encouraging mingling among the students of different races.

However, the PTAs today said the recently concluded Sports Day on April 27 - the Vision School Championship - saw students and teachers from the three schools being divided according to their house colour rather than along school lines.

"For information, all three schools within the USJ15 Vision School complex have held various joint-programmes involving students, teachers and parents such as for festivities, Teacher's Day, National Day and the Vision School Championship.

"Furthermore, we also meet together to discuss issues concerning cleanliness, safety and programmes for the USJ15 Vision School Complex," they said.

The PTAs added that while all three schools have their own management to handle curricular and co-curricular affairs, the sharing of facilities encouraged mingling.

"We can see students and teachers sit together to eat and drink in the canteen during recess. Furthermore, we also see joint-use of the field for physical education," they said.

The Vision School concept was first mooted by Dr Mahathir Mohamad when he was the fourth prime minister. It was launched in 2003.

This was to tackle the issue of polarisation in education where most national schools were dominated by Malay students while SJK(C) comprises primarily Chinese students and SJK(T) having mostly Indian students.

The idea was if the three types of schools shared common facilities, it would encourage mingling among its students.