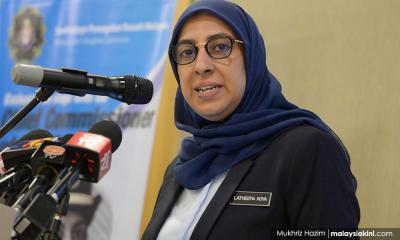 MACC to investigate plotting and monopoly in gov't project bid

The MACC will investigate those who plot and monopolise the bidding for government projects.

Chief commissioner Latheefa Koya acknowledged that the MACC received numerous reports of government tender and procurement cases and the matter had received MACC’s attention and action.

"There are many reports of cases regarding tenders and so on received but the MACC cannot disclose this information as it is likely to interfere with the investigation," she told reporters at the 2019 Gohek Beskal and Khabak Merdeka Programme in Bukit Besar, Kuala Terengganu today.

She was commenting on a local newspaper report today that revealed at least 10 government projects worth millions of ringgit, were now under investigation by the Malaysia Competition Commission (MyCC) as the company that had won the tender was suspected of plotting a bid to cause a loss of public funds.

Latheefa, meanwhile, said the Gohek Beskal and Khabak Merdeka 2019 Programme was an initiative by the graft-buster to combat corruption among young people.

She said this was because corruption cases involving young people were worrying and one of the main factors for the problem was the lack of awareness of corruption among them.

"We will increase prevention-type programmes aside from carrying out operations or arrests, we want to emphasise on programmes that are more educational and preventive," said Latheefa, who also climbed the summit of Bukit Besar with about 100 local youths.