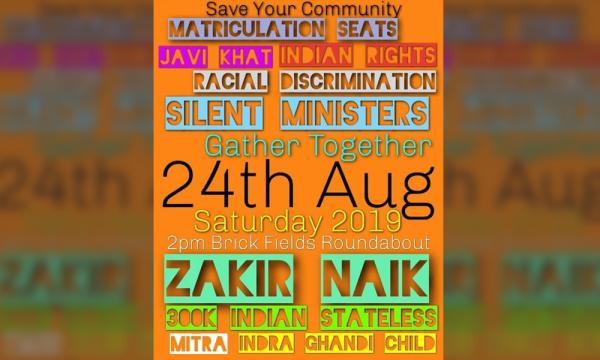 Police today confirmed receiving a notice by organisers of the planned 'Say No to Zakir Naik, Equal Rights to Indians & Other Races' rally, but say that the notice was incomplete and did not meet legal requirements.

"As such, the public is advised not to participate in this gathering to ensure the comfort and well-being of locals," acting Brickfields police chief Arifai Tarawe said in a statement.

The notice was pursuant to Section 9(1) of the Peaceful Assembly Act 2012 signifying the intention of holding the rally at 2pm on Aug 24, 2019, at the Water Fountain in Little India, Brickfields.

Arifai also advised against attending another rally on the evening of Aug 23, to protest the introduction of Jawi lessons in Tamil schools, as its notice was similarly incomplete.

Indira Gandhi Action Team (Ingat) president Arun Doraisamy confirmed that M Indira Gandhi – who has become a focal point for protests against unilateral conversions – had been asked to speak at the Saturday rally.

"She will not be attending, but I shall be speaking on her behalf," he told Malaysiakini.

Arun (left in photo) said that the rally will address five separate topics:

Rally organiser Shankar Ganesh said that he expected the rally to go ahead without any problems, and that a large turnout was expected.

"I think the police must not have been probably briefed," he said when contacted.

"The rally will go on. We met with Federal Territories Minister Khalid Abdul Samad today at Putrajaya and he agreed to receive our memorandum at 5pm on Saturday."

Shankar posted a link to the meeting on his Facebook.

However, an aide to Khalid said he had no knowledge of the meeting and could not confirm whether such claims were true.

No deportation of Zakir Naik for now - Mahathir

Zakir back in Bukit Aman, this time over report against minister, 4 others