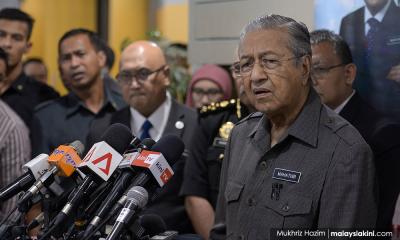 Prime Minister Dr Mahathir Mohamad said the public has a choice whether or not to utilise the motorcycle ridesharing service.

"If you don't feel safe, don't use (the service). You have a choice. We are not forcing you to take motorcycle rides," he told reporters in Putrajaya this evening.

Mahathir was responding to those who have opposed the proposal on safety grounds.

Commenting on this, Mahathir said the government is looking at how far the service would benefit the people.

The prime minister revealed there have been offers from local players to operate the service but these firms are disorganised.

"If (Indonesian-based firm) Gojek comes here, they will also serve the small businesspeople," he said.

However, Mahathir did not elaborate on how the Indonesian-based company would work with local firms.

Saddiq had said the service would enable motorcyclists to earn an income, which he said is a better alternative than youths engaging in illegal racing.

He said it would also enable youths to get the capital to invest in their education and future.