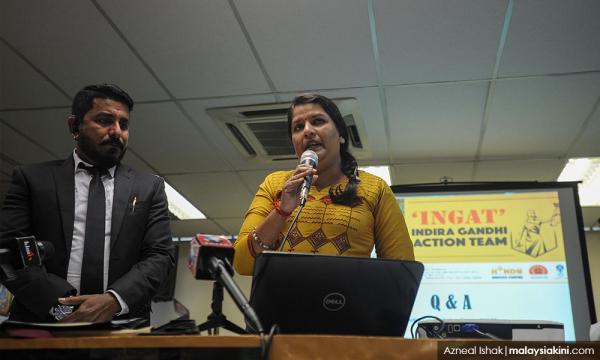 Indira takes search for missing daughter on the road

The Federal Court had quashed the unilateral conversion of her children, and a warrant had been issued against her ex-husband, who allegedly abducted their youngest daughter Prasana Diksa.

But 20 months later, nothing has materialised, prompting Indira Gandhi to again take matters into her own hands.

The mother of three will be embarking on a roadshow, from Kuala Lumpur to Johor, and then to Perak, Penang, Kedah and possibly Kelantan, to tell the story of her missing daughter.

Indira Gandhi Action Team (Ingat) chairperson Arun Dorasamy, who is jointly organising the roadshow, said this is no longer a case of unilateral conversion.

Prasana Diksa was taken by her father Muhammad Riduan Abdullah 10 years ago, when she was just 11 months old.

Since then, Indira Gandhi has only seen Prasana Diksa once – at a solitary court proceeding, when her daughter was 18 months old.

Arun, however, said Ingat is confident that she can be retrieved soon.

"We are closing in," he said, adding that they believe she is in the "northern region."

Arun said they are waiting for an appointment to meet with Inspector-General of Police Abdul Hamid Bador and share the information they have.

Ingat had previously claimed that supporters of preacher Zakir Naik and PAS-friendly groups were providing shelter to Riduan. PAS has denied this.

The roadshow starts this Saturday in Brickfields, and will be held in other states every following week. A date for the Kelantan leg has yet to be set.