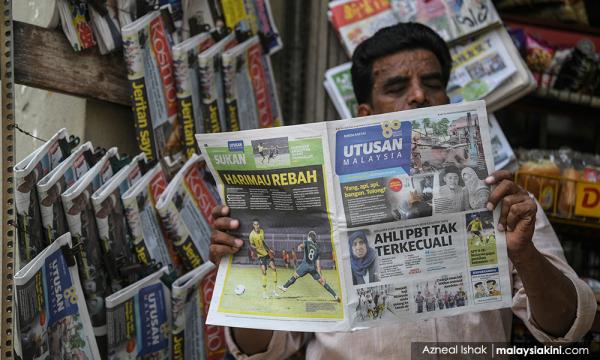 YOURSAY | ‘The paper never grew a backbone outside of its racial narratives.’

Kawak: It is easy to blame others but not yourself, former premier Najib Abdul Razak.

The 1MDB scandal was your own doing. The bank accounts of Umno were frozen because of the money received from 1MDB. Why blame Pakatan Harapan?

Anonymous_a1f2a23e: Najib, this talk by you is a good example of how bad guys twist facts to make the bad look good.

The frozen Umno accounts are due to the 1MDB case where you were the alleged mastermind and now standing trial in court. It has nothing to do with Utusan Malaysia.

Don't add salt to the wounds of Utusan. Behind every Utusan staff is a family who depends on them. Please use your money that is hidden somewhere to help them.

Meerkat: This is an admission that Utusan was funded by illicit funds all along. Anyway, don't waste your breath asking people to buy the paper. Malaysians are not fools.

If Utusan had been self-sustainable, it won't be in this predicament and people would be buying the paper without any prompting.

Do you expect the people to pay for Umno’s propaganda now? The pity is that many of the staff not being paid have nothing to do with the content of the papers.

They are like any other young person, mom or dad trying to make a living by doing their jobs - filing, administration, cleaning, or as reporters (who are mostly overridden by their editors).

Those responsible for the propaganda are probably working in other areas in Umno's stable, perhaps even as cybertroopers.

Clever Voter: Utusan deserves no pity. The paper lacks objectivity and professionalism. It relied on political patronage, much of the money from taxpayers. It was the political mouthpiece of Umno.

Utusan has to accept the consequences of what had taken place. Najib of all people should be the one to take the blame. He, too, had benefited from the years of publicity given to him by Utusan.

The demise of the paper tells us the moment one invites the politicians in, that is the day the rot begins. Utusan is not alone, there are hundreds of examples suffering the same fate.

Franck Scot: Stop blaming others for your own incompetence. Let's not forget that after the GE14, Utusan became a private enterprise that was no longer bankrolled by Umno.

Now, they have been unable to compete with other media outlets and may die a natural death. just like many news media around the world. What is wrong with you, Najib?

Malaysian-United: Since Utusan was essentially founded due to politics where its existence and sense of purpose was exclusively tied to Umno and has never functioned independently as an objective newspaper company, it would be unlikely to survive outside its host's (Umno) political ecosystem.

Hence, the more reason to let it die a natural death. Let the fall of Utusan be a symbolic reminder of better things to come.

Quigonbond: Pusing sana sini (turn here, turn there), after a while Najib won’t be able to keep to a straight story.

Staff at Utusan should ask him the frequency of Umno injecting funds into Utusan? When BN was in charge, it forced government departments to subscribe to the paper. Clearly, there was a conflict of interest.

The paper never grew a backbone outside of its racial narratives. So don’t pretend, if Umno has the money it would save Utusan.

The paper’s staff should further ask why Umno’s money was frozen in the first place. Najib is putting the blame on prosecutorial victimisation.

But just check out the reports on SRC trial, that’s just the tip of the iceberg and it’s already not looking well for him.

How long has the newspaper been in business? What has the paper been doing with the profits? There must have been many years of good times as Umno has been in power for more than 60 years.

How can you blame Harapan as the coalition was in power for just one year? Are you saying that they have no reserves all this while?

Don't divert the reason for the failure of the newspaper onto Harapan but on the people managing the newspaper.

My Understanding: It looks like your own Umno members are not supporting Utusan anymore since the party has sold off its stake.

When Umno itself has dumped Utusan, you can't be serious with what you said.

Love Malaysia: Indeed, don't blame Harapan. It was your own doing that Utusan is in its present state.

Utusan has lost a number of lawsuits due to your people’s effort in trying to tarnish your opponents' image.

If all the so-called three million Umno members buy the newspaper at RM1 every day, Utusan would have RM3 million in sales each day.

MACC didn't freeze the bank accounts of Utusan account and ordinary Umno members. Then again, who wants to read a paper full of s**t?

Bo Kia: Yes, Umno has three million members. If only one out of 10 members were to buy the papers once every 10 days, the paper will have a circulation of 300,000 every day.