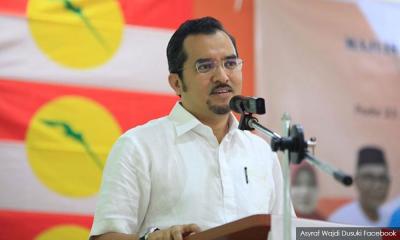 Umno-PAS to hold 'Save M'sia' mega rally in KL

PAS and Umno are expected to hold a series of speeches nationwide which will build up to a mega rally in Kuala Lumpur to show their solidarity for the country.

Umno Youth chief Asyraf Wajdi Dusuki said this during his speech at a protest against Kluang MP Wong Shu Qi in Kluang, Johor, today near her office.

The protest was held to demand the MP’s resignation after she used an example of pornographic material in Jawi when explaining the history of Jawi writing during a dialogue session with representatives from the Tiong Hwa Association and 27 other Chinese groups in Kluang.

Wong, in her defence, stressed that her speech was taken out of context.

According to Asyraf, there had never been a time when Malaysians of different races and religions showed disrespect and prejudice towards one another until now.

"Never in history, not in 51 years of BN rule, did we witness such an ugly relationship among the Chinese, Malays, and Indians.

"Since Pakatan Harapan took over, what happened to the respect for different races and religions? DAP has tarnished them one by one," he said.

Following that, Asyraf urged the people to express their love for Malaysia in a mega rally. However, no date has been confirmed yet.

"From Kluang, we will move nationwide. We will rally not only Umno and PAS, but also NGOs.

"We will make sure that we stop from one town to another, before converging in a mega rally...a people's rally in Kuala Lumpur.

"We will show our solidarity regardless of race and religion, on one theme - Save Malaysia," he told the crowd who attended the protest despite a downpour.

Commenting on Wong, Asyraf said she has to apologise not only to the Malays but to the Chinese because she had linked the latter to pornography.

"Wong said that in order to help Chinese understand something, she has to give pornography as an example.

"Can we accept this? It's an insult not only to Jawi, but to the Chinese. We have to press her to apologise and resign," he said.

Wong had alleged that Umno and MCA were playing an “evil political game” against her.