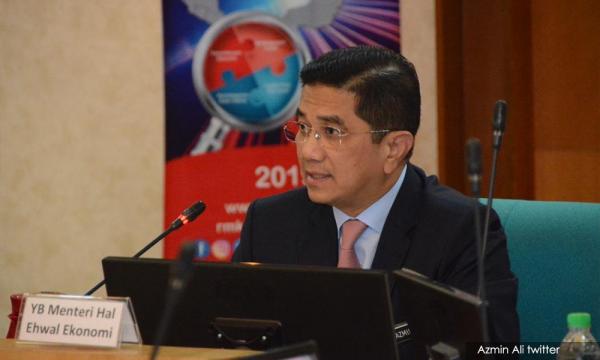 A total of RM988.5 million has been allocated as Terengganu’s development expenditure this year, according to the Economic Affairs Ministry.

The ministry, in a statement, said the allocation was one of the initiatives mooted in efforts to achieve the shared prosperity vision announced by Prime Minister Dr Mahathir Mohamad on May 9.

“Terengganu is one of the key states in the preparation of the 12th Malaysia Plan (2021-2025), as one of the main goals of the country’s long-term plan is to bridge the development gap between the regions, in line with the main objective of shared prosperity vision,” it said.

The statement was issued following a one-day visit by Economic Affairs Minister Mohamed Azmin Ali (photo, above) to Terengganu today to meet state government leaders, staff as well as entrepreneurs.

The allocation was a 4.1 percent increase compared to the previous year and the federal government has also made the payment of oil royalty to the Terengganu government for 2018.

The federal government has also shown its concern with the relaunch of the East Coast Rail Link (ECRL) project which was seen as bringing in more benefits with the increased connectivity between Terengganu and the economic centres of the west coast, the statement said.

“The federal government believes that through increased provision of development and strategic cooperation with the Terengganu government, it will certainly be able to tap into the potential economic impact in the state.

“Among them are the transportation and logistics sectors, oil and gas downstream industry, eco-tourism and smart agriculture downstream industry, that will not only open more high-income job opportunities to the people of Terengganu but also generate economic growth that will attract more investment into the state,” the statement said.

He then held a closed-door discussion on the preparation of the 12th Malaysia Plan with the Terengganu government.

Terengganu is the ninth state in Azmin’s tour series which started on July 5, 2019.