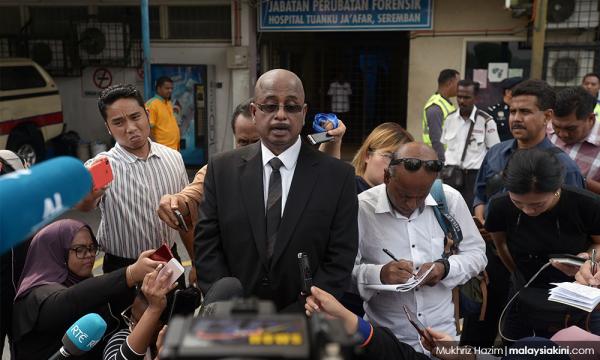 Malaysian police should accept an offer by French authorities to help investigate the death of an Irish girl whose naked body was found near a jungle stream, the family's lawyer said on Wednesday.

Autopsy results are expected later in the day, police said, after the body of Nora Anne Quoirin, 15, was found on Tuesday, 10 days after she went missing from a rainforest resort in Seremban, about 70km (44 miles) south of Kuala Lumpur.

"The family expects the police to do a thorough investigation into the incident, including criminal angles," their lawyer, Sankara N Nair (photo, above), told Reuters, clarifying an earlier comment that the family "won’t press for anything" did not mean they opposed a full inquiry.

He urged Malaysian police to accept an offer by French Foreign Minister Jean-Yves Le Drian to help investigate the circumstances of the death.

"It's a very good proposal," he said. "I hope the police will accept the assistance."

Nair did not elaborate.

Nora's mother is from Belfast while her father is French. The family is still at the resort, Nair said.

Police said they would answer questions on the incident later in the day.

The family initially feared a criminal angle in the disappearance, saying she had special needs and had never before left her family voluntarily, a British victims' group, the Lucie Blackman Trust, said in a statement issued on their behalf.

An initial investigation yielded no evidence of criminal behaviour but police would look at all possibilities, Malaysia’s deputy police chief, Mazlan Mansor, said on Tuesday.