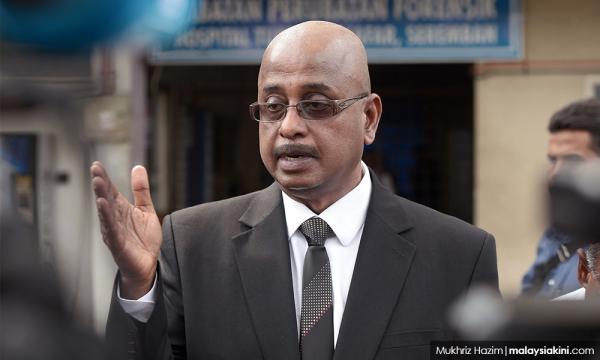 The results of the autopsy on the body of Franco-Irish teenager Nora Anne Quoirin will be submitted to the Attorney-General’s Chambers to determine whether there is a need for an inquest, said lawyer Sankara N. Nair (above).

“Procedurally, what happens is that a copy of the post-mortem report will go to the AG’s (Attorney-General’s) Chambers and it is for the AG to decide or instruct whether there is a need for an inquest.

“Normally, sudden death of such a nature would invite an inquest, but then again it is under the evidence that is presented in the post-mortem report and other investigation by the police,” Sankara Nair, who is representing the family of Nora Anne, told reporters today.

Replying to a question, he said the family of Nora Anne had come to the Department of Forensic Medicine at the Tuanku Jaafar Hospital, Seremban, today to confirm the identification of the body once again before the autopsy.

He also said that the family members were sad and in a state of trauma.

“We have not discussed the next plan yet. I think they are still pondering on the next course of action, and they are still grieving, and I think it is not in their minds yet,” he said.

The body of special needs child Nora Anne, 15, who went missing from The Dusun resort in Pantai near here on Aug 4, was found in the jungle about two kilometres away yesterday and brought to the Tuanku Jaafar Hospital at about 7 pm.

Her family had checked in to the resort a day earlier for a two-week holiday in Malaysia.