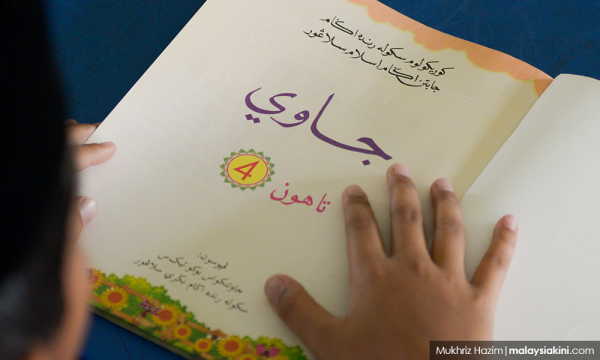 MP SPEAKS | Good sense should prevail now that the dust has settled on the khat fuss. Both sides should now close rank after the cabinet made its decision based on a general consensus.

Little did people realise that the BN government had already rolled out the teaching of khat in the Standard 5 Bahasa Malaysia syllabus in vernacular schools as early as 2016.

At the same time, they had approved the policy to implement khat in vernacular schools for both Standards 4 and 6 at a later date.

Admittedly, when the policy was announced recently, the Education Ministry did not communicate this policy properly, leaving a lot of room for dispute. It became very messy when so many parties became involved in the entire fiasco.

In the first place, the subject should have been discussed with other lawmakers since it involves a sensitive issue that could be easily played up by the opposition.

This was never done, leaving many of us in the dark and unable to explain to our constituents.

Known for the number of controversies involving his announcements, the honourable Education Minister Maszlee Malik should, from henceforth, stop making unilateral announcements without consulting his fellow lawmakers who represent the wider spectrum of our multicultural society.

With the widespread use of social media, the incident involving a man who pelted eggs at Menglembu assemblyperson Steven Chaw's service centre in Ipoh is unfortunate.

Something as simple as khat can become a heated topic of discussion for over two weeks. There is no point trying to douse the fire after it has spread far and wide.

Even Lim Kit Siang was heckled by some opportunists during a Hungry Ghost festival.

The DAP adviser never said he supported the teaching of Jawi in schools, but merely said that he had learnt Jawi while he was detained under the Internal Security Act in 1969.

Across social media, even Prime Minister Dr Mahathir Mohamad received his fair share of criticism for standing by the Education Ministry’s decision.

The last thing that Malaysians want to see is to be told that silat is suddenly made compulsory in schools as part of the Malay culture. This is how regressive some of our politicians can be!

This fiasco should never have happened as the controversy had nothing to do with race or religion. Many Malays, including Daim Zainuddin, Rafidah Aziz, Siti Kassim and Azly Rahman, have sounded their objections too.

At the same time, the whole issue became mired because of the bogeyman politics played by certain quarters.

It is unfortunate that DAP leaders became the punching bag within certain communities, when it was just the ordinary, non-partisan parents who voiced their concerns over the ministry’s initiative.

Some, including pro-Malay Rais Yatim (above), have urged the government to separate Arab culture from Islam. In what Rais labelled as Arabisation of Malay culture, for too long the Malays have embraced Arab culture as Islamic.

Within the Christian community, there are also two opposing views regarding the learning of khat.

On one hand, some, including the larger non-Muslim community, are concerned that learning khat could lead to the conversion to Islam in schools. This view is expressed against the backdrop of Maszlee’s statement in December about making schools in East Malaysia ‘medan dakwah.’

While this concern is valid for some, others also argue that khat, whether Arabic or Jawi, is a form of calligraphy that can also be used to communicate the Christian message to at least one billion Muslims.

A quick search on the internet shows that there are many Arabic Bible verses in beautiful khat.

Generally, most people are not opposed to the learning of khat, but it should have been introduced as an elective and done outside the school hours, or parked alongside with other forms of calligraphy within art lessons. This would give children good exposure to various forms of calligraphy.

The National Language Act 1963/1967 clause 9 clearly states that “the script of the national language shall be the Rumi script”. The law is silent about the learning of Jawi script as compulsory for all Malaysians, although it does not prohibit anyone from using the Jawi script.

Therefore, we should emphasise the options given to children. They can choose to learn the Jawi script or the calligraphy form of Jawi as part of their extra-curricular activities.

Moving forward, khat should be taken out of the Bahasa Malaysia syllabus and taught as part of Cultural Heritage and Art of Calligraphy (Warisan Bangsa dan Seni Tulis).

With an education system already in shambles, khat is the least of all priorities that should occupy the ministry’s attention. As pointed out by Daim recently: “The Education Ministry must not fail our nation.”

The nation’s education system should focus on core subjects that will help young people excel in their future careers. We need more qualified people to helm the Education Ministry.

Edmund Santhara is the MP for Segamat.