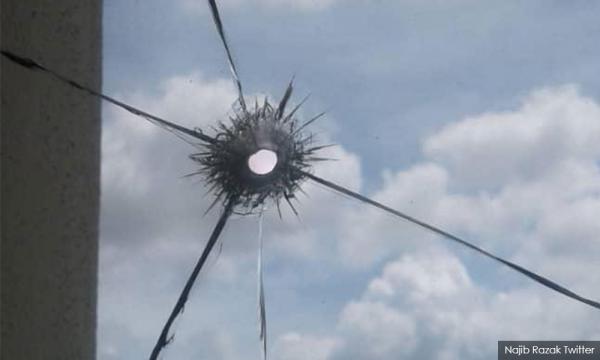 Former premier Najib Abdul Razak shared a photograph showing what appeared to be a bullet hole on a window at his office in Pekan, Pahang.

“Some have accused me of lying about the security threat which happened in 2017. Okay, I will continue the disclosure with a photograph.

“This is one of the reasons why the UTK (police special operations force) security detail was heightened from 2017 to 2018,” he tweeted this afternoon.

Najib, who is also the MP for Pekan, had first disclosed the incident during a forum in Kuala Lumpur on Wednesday night.

The former premier said the shot was aimed at his room in the but he was not present in the office during the incident.

“It seemed like a warning to me,” he told the audience.

"I have never disclosed this incident. But since then, security has been tightened for me," he had added.

Najib said a police report was lodged regarding the incident but the authorities were unable to trace those responsible.

"The police could not find who did it. The case was classified as NFA (no further action)," he added.

A photo of the police report lodged on Nov 13, 2017, at Pekan district police headquarters was shared by the former premier today.

He also shared a statement by Pekan Umno, clarifying that the shot was believed to have been fired over the weekend on Nov 11 or 12 when no staff were present at the office.

Following the incident, the division said they installed CCTV cameras, and replaced the shot window with a brick wall.