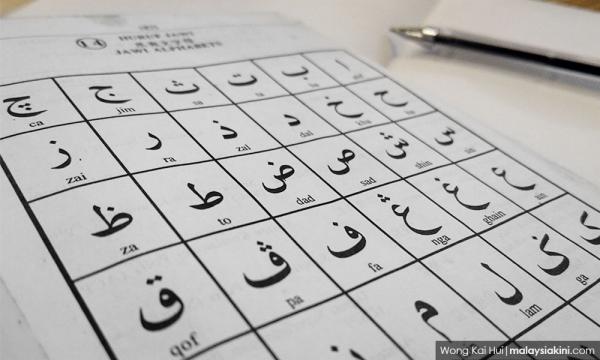 MP SPEAKS | I met Malaysians and Malaysian students during my recent trip to Salem.

From afar, I have been following developments back home, including the controversy over plans to introduce khat or Jawi calligraphy in the Year 4 Bahasa Malaysia curriculum for Chinese and Tamil primary schools.

This appears to be the position of the Jawi controversy so far:

Is it going to be compulsory for students in Chinese and Tamil primary schools to learn Jawi script under the new plan?

The answer is no, as the Education Ministry has assured that pupils would not be assessed on their mastery of the art.

When were plans to introduce khat as part of a revision of the curriculum decided?

Is the Education Ministry prepared to entertain further views on the matter?

“Although the plan to introduce khat in schools will proceed, the ministry will still accept the views of various parties to ensure that there is fair consideration,” the ministry said in a statement on Friday.

KiniGuide: How much 'khat' is in the BM syllabus and other questions answered

Maybe another question that should be asked is whether a person who learns Jawi is betraying the Chinese race, language and culture.

To me, the answer is in the negative.

When I was first detained under the Internal Security Act in 1969, I taught myself Jawi in detention. It did not make me any less of Chinese, and may have helped in making me more of a Malaysian.

What form of nation-building should be pursued in multiracial, multilingual, multicultural and multireligious Malaysia – assimilation or integration?

In 1994, Dr Mahathir Mohamad, in his 13th year as the fourth prime minister, announced that the BN government had given up its nation-building policy of assimilation as it had realised that this was unsuitable for a plural society like Malaysia.

He said that integration, and not assimilation, should be the basis of the nation-building process in the country.

This is not the Malaysia that I strive for.

The Malaysia I want to see is one where the Malays, Chinese, Indians, Kadazans and Ibans come out of their own universes to interact with other communities; to learn, appreciate and accept that Malaysia is not to be identified with any one community, but with all the different communities who have made this land their mother country.

As I said in Chennai yesterday, one question all Malaysians must ask: Who is the 'other' in the Malaysian context?

If this is the answer, then we have not yet succeeded in Malaysian nation-building, for the 'other' must be a non-Malaysian, whether from Indonesia, China or India or any other part of the world.

He said people should not look at Jawi's introduction as cultural assimilation as the introduction of khat writing was an effort for school students to recognise the country's heritage and identity.

The Jawi script, for example, is in the ringgit note, the coat of arms for Malaysia and in the emblems of the various states.

I must admit that I had not realised that Jawi is in the ringgit note. This made me look at the Indian rupee note, and there is not only the Hindi official script, but other regional official languages as well like Tamil, Telegu, Marathi, Urdu, Malayanam, Gujarati, Bengali, Punjabi and Kannada.

I agree that the pressing importance in Malaysia with regard to education is to introduce reforms so that Malaysian students in international assessments can attain above global average results and be ranked in the top one-third of world countries, instead of being placed in the lowest one-third bracket as is the position today.

Malaysia seems to be trapped in an extraordinary situation which, if not addressed, will only lead to greater division and disunity, stagnation and failure to leverage on the best values and qualities of the Islamic, Chinese, Indian and Western civilisations which meet in confluence in Malaysia to build a great Malaysian nation.

Every community is made to believe that its culture and ethnicity is facing an existential threat.

But who is creating all these threats to all the racial groups in the country? Not only the various races feel threatened, Islam feels threatened and the non-Islamic religions feel threatened.

Malaysians must develo the self-confidence to reach for the stars, a new 'Malaysia Boleh' spirit, to exorcise the various contrived or imaginary fears and demons, for Malaysia to excel itself in various fields of human endeavour so as to achieve a golden age for Malaysia.