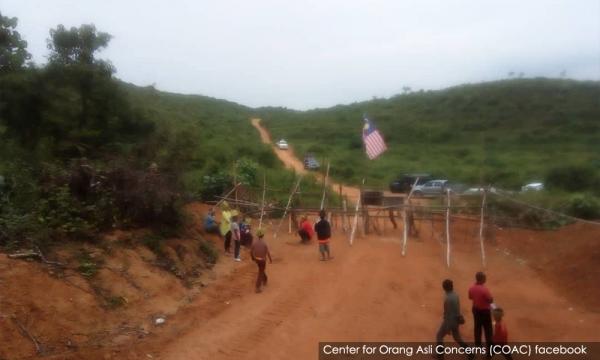 Foreign journalist Alexandra Radu was detained at the blockade set up by Temiar villagers in Sungai Papan, Gerik, Perak this morning.

Villagers confirmed with the Centre for Orang Asli Concerns that the blockade had been destroyed and loggers had entered their customary land, together with officials from the Forestry Department around 11am.

Radu, who is Romanian, was taken into police custody.

She told Malaysiakini that she was taken in for questioning, and then released and returned to Sungai Papan.

Radu said she was detained for "taking photos at the blockade so the authorities said I was in kawasan hutan simpan (forest reserve area) without a permit".

She is a freelance photojournalist who has been based in KL for the last three and a half years. She was in Sungai Papan on assignment for The Diplomat.

"I was documenting the blockade as it felt important to be documented," said Radu.

Sources told Malaysiakini that Perak Menteri Besar Ahmad Faizal Azumu heard about the incident and instructed that Radu not be detained.

Speaking about the incident, the Organisation for the Preservation of Natural Heritage Malaysia (Peka Malaysia) said: "We regret that the state authorities and loggers are adamant and continuously encroaching upon their (Temiar) customary lands, despite numerous police reports and complaints being lodged with the relevant authorities and ongoing investigations.

“We hope there should not be any attempt to curb any media's right of information and the public's right to know any matters pertaining to Orang Asli in this regard.”

They criticised the aggression of state authorities and loggers, adding that “their complete disregard of the rights of the Orang Asli (and) towards customary land and the rule of law is intolerable”.

"We call upon the federal government and the minister in charge of this affair to immediately intervene in this matter to protect and safeguard the Orang Asli from any form of abuse,” said Peka.