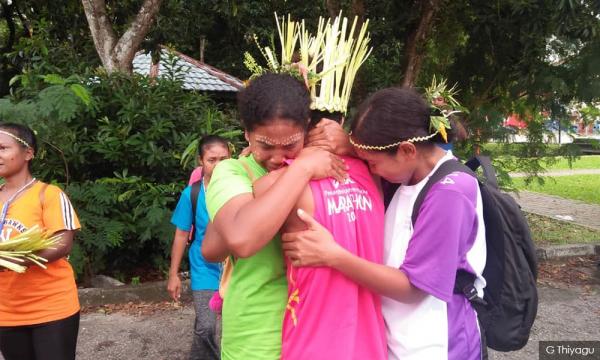 Yoursay: Will rule of law prevail for the Orang Asli?

Those who bully Orang Asli students learned it at home - activists

BRoch: Sure, parents are to blame, but what about politicians? The Perak menteri besar doesn't even think the Orang Asli exist.

Cameron Highlands MP Ramli Mohd Noor was the first Orang Asli to be elected to the Dewan Rakyat – six decades since Independence.

Have the Orang Asli been mainstreamed? How many Orang Asli do you know personally? Why aren't they in urban schools, represented in the civil service, or any other profession besides NGOs that have to do with Orang Asli affairs?

If they were treated like human beings, there would be less discrimination all around.

But our politicians view them as standing in the way of all that sweet, sweet logging money. So it is in the government's best interests to do the bare minimum for them to win votes, while also ushering them into extinction.

Since Kampung Kuala Koh, Orang Asli affairs have remained in the news cycle. And yet, how many Pakatan Harapan lawmakers have spoken up? Of those who did, how many with actual power, beyond the usual suspects on the fringes of their parties, whose words will be of little consequence?

And how many reminders does Harapan need of the promises in their election manifesto?

“Harapan wants to recognise, uphold and protect the dignity and rights of this indigenous community.

“Customary land is an important matter for indigenous peoples. The Harapan Government will work to implement proposals from the National Inquiry Report on Indigenous Land Rights prepared by Suhakam in 2013. This report has been ignored by Umno and BN and will be brought for parliamentary debate in the first year of the Harapan’s administration.”

As a measure of how little they matter, Harapan hasn't even offered a weak defence why they have not fulfilled any of the items listed above, besides the appointment of Juli Edo to the Orang Asli Development Department.

Even the Harapan leaders who went to Kuala Koh for photo ops still turned around and blamed them for the disease outbreak.

So the government can't figure out what killed the Bateq villagers, but are sure it's the community's own fault?

If they do not exist as human beings in our state institutions, is it any wonder they are treated as such by the people?

Citizen: Centre for Orang Asli Concerns (COAC) coordinator Colin Nicholas is right. The rights of the Orang Asli in Perak to their native customary land has been declared by the Ipoh High Court.

But as usual, administrators and those with vested interests will not give it back to the Orang Asli community.

Shame on all those evil people who want to grab the Orang Asli lands. What if Malay reserve land was grabbed?

Perhaps Perak has a different definition of the rule of law.

Anonymous_1543918786: This is sheer incompetence on the part of Perak Menteri Besar Ahmad Faizal Azumu in saying that Perak does not recognise customary land for any ethnic group under the state constitution, including the Orang Asli.

Or it is purposely delivered with evil intention. The whole of the Perak Legislative Assembly seems to be in the same boat.

How could a court ruling as recent as 2015 be forgotten? There is definitely an agenda on their minds.

Hang Babeuf: A precedent? Yes, of course there is. The menteri besar is a chump, like US President Donald Trump. Or a boofhead, like UK Prime Minister Boris Johnson. He is hopeless.

Plato: I think the fault lies with the whole Perak executive council, because such decisions involving deforesting the lands of the Orang Asli and the issuing of logging permits and licences falls within their purview.

RakyatBiasa: What do you expect from Faizal, who made the jump to Bersatu from Umno? You can take a man out of Umno, but not Umno out of the man. And when caught, he will plead ignorance.

Fairman: Aren’t DAP lawmakers Abdul Aziz Bari and A Sivanesan sitting on the Perak executive council? What are they doing?

S Kumar: @Fairman, likely sleeping. Before the 14th general election, they were very active. Now they have posts, so why bother about anything? At the end of the month, the paycheque comes whether they do the job or not.

The Orang Asli and the loggers can kill each other for all they care. Any different from BN gangsters?

Watan: The menteris besar of Perak and Selangor seem to have just woken up from meditation in a cave. Their understanding of law is nothing but a joke.

What kind of talent and capabilities do these people have to be menteris besar? Just like in Umno, the corrupt always need morons in charge.

We are still in a daze as to how Faizal was appointed the Perak menteri besar over so many other candidates who are well qualified to hold the office.

Prime Minister Dr Mahathir Mohamad seems to have a lot of excuses for not implementing any promises contained within the election manifesto.

Maybe he wants Umno to take over the ruining of the country again after him, now that he has shown his keenness to stay on for the full term.

Odysseus: Faizal will be the single cause of Harapan’s downfall in the state. Other component parties cannot remain silent as this guy is showing his true Umno colours in disrespecting the Orang Asli.

No Fear Nor Favour: The Perak ruler must look into the plight of the Orang Asli. They are also his subjects.

My2Cen: We need a national movement, akin to Bersih, to galvanise support for more people to join in the course to defend Orang Asli rights. They are the most persecuted people in Malaysia.

The Analyser: I wonder what would make the former Suhakam commissioner think that Harapan is remotely interested in anyone but themselves.

And now, when the whole of the non-Bersatu components of Harapan have their behinds on the line and their future crumbling before their eyes, the last thing on their minds will be the Orang Asli – assuming that at some stage in the past they might have cared.