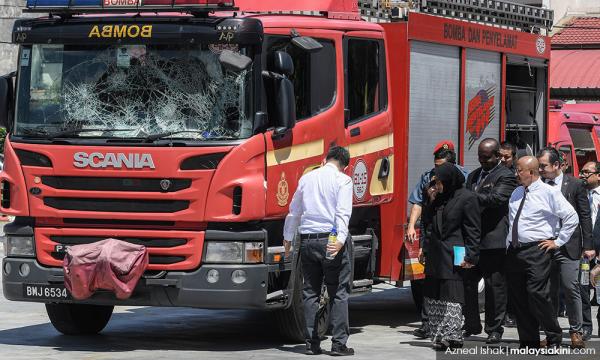 YOURSAY | 'Can't please everyone, so let the coroner not be influenced by anything other than the truth.'

Malaysia My Home: Whatever coroner Rofiah Mohamad decides in the inquest into the death of firefighter Muhammad Adib Mohd Kassim, there will be complaints.

You can’t please all of the people all of the time, so we can only hope the verdict is not influenced by anything other than the truth.

Broch: So badly bruised is this nation that the truth will never be known. It is because the truth hurts, and no one wants to be hurt.

Ravinder: There is no evidence that Adib was beaten by a mob, only speculation based on imagination or some other consideration.

But there is good evidence that he was hit by the Fire and Rescue Department van.

One thing that clearly emerged from the inquest is that there is a party that wants the findings to point fingers at the crowd, and not at the van reversing in a panicked situation.

This party brought in 'experts' to prove the Hospital Kuala Lumpur forensic pathologists wrong. But I take my hat off to these pathologists for their steadfast presentation of their findings.

How a beating could produce the rear of seven left ribs broken top-to-bottom in a vertical line is beyond comprehension. Let us wait and see what the coroner finds.

Retnam: ‘Those 13 seconds’ will be the title of the verdict.

The coroner must, with a clear conscience, decide whether the rioters could pull the firefighter out of a moving vehicle and bash him up within those 13 seconds. All other evidence is irrelevant.

Thana55: But what about those who raided the temple in the first place, and the ones who hired them? Bring them to justice. Who is doing the slow waltz in this matter?

Malaysian United: Precisely. Adib's death was a later consequence of the temple attack. The attack was the trigger.

If there was no temple attack, there would be no collateral damage, the firefighter's life would have been spared.

This whole inquest is a farce. Incredibly, it has succeeded in drawing the nation's attention away from the real issue, which is getting at those responsible for the temple attack.

To pervert the matter even further, certain quarters are turning it into a racial issue. Can anything get more twisted than this?

Roger 5201: Adib would have died a more honourable death had racist politicians and religious bigots kept out of this inquiry.

Why implicate the attorney-general for conspiracy? What do they get out of the verdict going their way?

Gerard Lourdesamy: Lawyers representing Adib's family claim that Attorney-General Tommy Thomas was in contempt of court over an affidavit filed by his chambers stating how the firefighter died.

How can it be contempt when the affidavit was filed in an unrelated proceeding, namely the application by the Save Seafield Mariamman Temple Task Force to intervene and stay the inquest pending their appeal?

The affidavit was not filed for the purposes of determining the cause of death in the inquest.

When the affidavit was filed by the deputy public prosecutor, there was sufficient evidence to support the conclusion that Adib was not fatally injured by the mob that allegedly attacked the fire service personnel at the scene of the riot.

So how does that amount to an attempt by the attorney-general to interfere in the administration of justice and undermine the inquest proceedings?

The affidavit itself was not even affirmed by the attorney-general in the first place.

Furthermore, the coroner is not bound by the statements in the affidavit – which, again, was filed in unrelated proceedings – in order for her to arrive at a verdict on the cause of death.

The coroner will be guided by the oral evidence recorded before her from the witnesses and experts.

This contempt application is nothing but an abuse of process instigated by a misguided lawyer acting out of a personal vendetta towards the attorney-general.

It is time that the Bar Council considers referring the lawyer in question to the disciplinary board for professional misconduct.

Muruga: Deputy public prosecutor Hamdan Hamzah submitted the affidavit stating that Adib was not beaten up on April 3. The temple committee said that based on that affidavit, they withdrew their appeal.

Four months have passed, and in that time, there wasn’t a whimper from Syazlin Mansor, the lawyer representing Adib’s family, and formerly the Housing and Local Government Ministry, in the inquest.

So why now? Were they all sleeping before this?

The affidavit was submitted based on the facts available from the forensics reports. To now rule otherwise would be contempt of a higher court, as it was accepted as fact.

Retnam: Hamdan filed the affidavit so that the lawyer representing the temple committee would agree to withdraw his appeal.

If he did not do so, the inquest could not have continued until the appeal case was disposed of in the Court of Appeal, and probably the by Federal Court subsequently.

Annonymous 080: Thomas says that although 1,200 legal officers in the Attorney-General's Chambers report to him, he does not direct nor instruct them in their daily tasks.

First, let’s examine the real matter – the Attorney-General's Chambers will only report what police investigations show.

Second, even if the deputy public prosecutor made a mistake, the attorney-general cannot wash his hands off the matter. The principle of vicarious liability applies.

We cannot have double standards, where parents get punished for their children’s wrongdoings, but the attorney-general escapes the actions of his officers.

Please, Thomas, have the gumption to admit if errors have been committed, or the courage to refer Syazlin to the Bar Council.