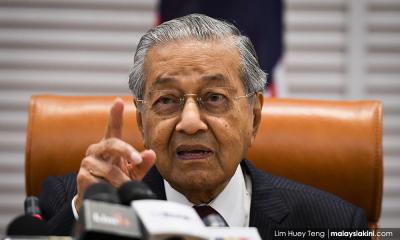 I will not be made use of, Dr M says of sex video scandal

Prime Minister Dr Mahathir Mohamad has vowed not to be "used" by those behind the recent sex video scandal implicating Economic Affairs Minister Mohamed Azmin Ali.

“I will not be made use of, especially not by a mastermind who has evil intentions and uses dirty politics.

“This is not a question of morals, it is a political problem. It will be handled as a political issue,” he said in a posting on his blog Chedet today.

Mahathir characterised the release of the videos as a political move designed to hamper a certain person's political advancement.

“The hope is that I will disqualify the targeted individual. I can do that as I have the power to do so.

“If I took such action then the mastermind behind this evil move would have succeeded,” he said.

"My religion prohibits me from deliberately spying to look for the bad in the others. What has been done is worse than spying," Mahathir added, not explaining what he meant.

Soon after, then-Santubong PKR Youth chief Haziq Abdullah Abdul Aziz confessed to being one of the men in the videos and named Azmin as the other. Haziq has since been sacked from the party.

Azmin (photo) denied the allegation and characterised the videos as a nefarious plot to destroy his political career.

The police are investigating the case, and have since arrested several people – including Haziq, an unnamed PKR assemblyperson and Perak PKR chief Farhash Wafa Salvador Rizal Mubarak – to assist in their probe.

Inspector-General of Police Abdul Hamid Bador said last week that the videos are believed to be authentic, but that the facial recognition software used failed to ascertain the identities of those involved.

Hamid also revealed that a leader of a political party was behind the videos, and that “hundreds of thousands of ringgit” had been spent to produce them.

Go to the cops with your info, Wan Azizah tells Azmin, Amirudin