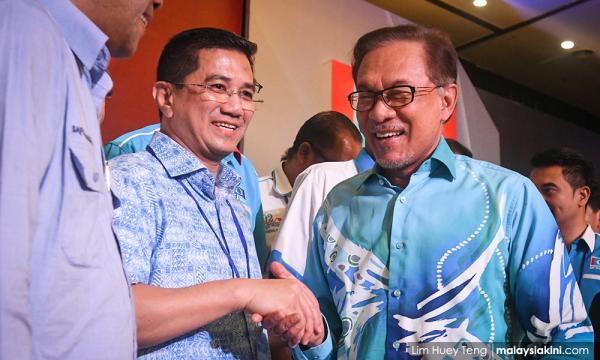 Azmin tells media not to provoke his ties with Anwar

PKR deputy president Mohamed Azmin Ali today sang a similar tune to PKR president Anwar Ibrahim, concurring that they were a "team" and saying that the media should not "provoke" their relationship.

This came a week after a widening rift between the two leaders with Anwar suggesting that Azmin should resign if a sex video implicating him is proven to be true.

This prompted Azmin to hit back at Anwar by telling him to "look in a mirror".

"Yes, he is the party president and I am his deputy. You (media) should not provoke the president and deputy president, we have been together for a long time," he told journalists after a thanksgiving prayer at the Selangor menteri besar's residence in Shah Alam tonight.

Khairuddin had launched veiled attacks against Anwar amid the tiff, asking that police also investigate past sex videos implicating Anwar to determine their authenticity.

Earlier today, Anwar, at the end of a three-day PKR retreat, said he and Azmin were still "a team" despite tensions between the two.

"Azmin is the deputy president. We have to work together as a team, have regular meetings and discussions.

"It is a team. He had the mandate at the last party elections (to be the deputy president)," Anwar told a press conference at the retreat venue in Port Dickson today.

This is after some 120 leaders at the retreat endorsed Anwar's leadership.

Azmin, who was scheduled to speak at the event, and several of his supporters were notably absent from the retreat.

However, Azmin tonight dismissed the notion that he had snubbed the gathering, explaining that his absence was due to other engagements abroad.

Last month, a sex video was released to politicians and journalists in several parts by anonymous persons.

Subsequently, former Santubong PKR Youth chief Haziq Abdullah Abdul Aziz admitted that he is one of two men having sex in a video. He claimed his partner was Azmin.

Azmin has dismissed the video as slander and an attempt to destroy his political career. He also alluded that it was an inside job.

Police have arrested several individuals, including Haziq (above, waving) and an aide to Anwar, as part of an investigation over the circulation of obscene content.

Inspector-general of police Abdul Hamid Bador had said an analysis by Cybersecurity Malaysia found the video to be authentic but facial recognition software could not confirm the identity of the implicated minister.

Anwar subsequently welcomed the findings that "Azmin was not involved", prompting a reciprocal statement from Azmin via Twitter acknowledging Anwar's statement.