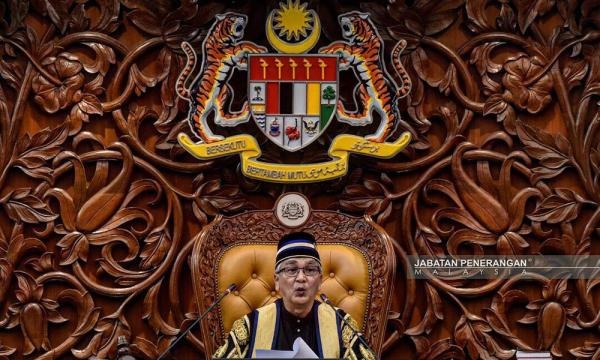 YOURSAY | 'Robbing is about illegally taking away something from its rightful place or rightful owner.'

The Wakandan: It was just semantic. Dewan Rakyat Speaker Mohamad Ariff Md Yusof’s ruling was right. There was no prima facie that what Finance Minister Lim Guan Eng said could be provoking or untrue.

This was what Lim said in the Parliament on Aug 17, 2018: “What was supposed to be paid in two weeks was not paid for two years because the money which was paid as an advance was not put into a trust fund, but into a consolidated fund as revenue.

“Because it was taken as revenue, it was used by the former government. I want to say here, it was not robbing GST, but robbing from GST refunds.”

That was the fact of the matter – the money was robbed from the GST trust fund. It was not there when it should be there.

Robbing is about illegally taking away something from its rightful place or the rightful owner. And this is what the then Finance Ministry did when it took away money from the GST trust fund and put it somewhere else – the consolidated revenue account.

That action was illegal, and therefore the money for GST refunds was being robbed. When opposition leader Ismail Sabri Yaakob agrees with the PAC’s finding, he is in effect agreeing with Lim, semantics notwithstanding.

So what was the Umno and PAS walkout about?

Prudent: It was already a breach of trust when the gross GST revenue collected was not first deposited in the GST trust fund as mandated by the GST Act 2014, but put into the consolidated revenue account and used for other government expenditure.

This is typical kampung mentality towards money. To them, all money available is like durian runtuh (a windfall) and can be used according to their whims and fancies.

Anak JB: BN should stop wasting time. The money supposedly meant for GST refunds were parked under the consolidated funds and was used for other means.

Call it rob, taken away, misuse from the GST fund or whatever… the crux is it was never used to repay what it was intended for.

Newday: BN and PAS – exactly what did you hope to achieve by your petty walkout?

Somehow you became heroes for truth and justice and the rakyat will be suitably outraged to demand that Lim must be locked up and the key is thrown away?

For PAS, it demonstrates the depths it will descend to in order to manifest its intense dislike of the 'Chinaman' in charge of our money.

It still does not matter to the pious party what its new mates in Umno did with their smoke-and-mirrors accounting practices that almost brought this country to bankruptcy.

Mind you, going by the financial condition of the two states that PAS controls, they really have no idea. So, this walkout sort of makes sense in a strange way.

Undecided: Why are we paying the salaries of MPs who behave in such a silly and infantile way?

Laws have been broken and they stage a walkout because of a too strongly-worded reaction on monies not accounted for.

You are wasting the Dewan Rakyat's time for more important discourses on badly-needed new legislations.

Gerard Lourdesamy: Who cares if the opposition stages a walkout. The government can proceed with its business in the House with no opposition from Umno and PAS.

Malulah Bossku: Rembau MP Khairy Jamaluddin is really useless for not barking loud enough against his former boss, Malaysian Official 1 (MO1). So, he has no moral ground to say the speaker is useless.

To compare with the former pro-BN speaker to the present one, the present speaker is 100 percent better.

Ipohcrite: When one uses an expression like, “I was robbed of the chance of getting a scholarship owing to affirmative action by the government,” it means that I was deprived of getting the scholarship.

When Lim had used the word “robbed” in the GST context, it simply means that GST refund recipients were deprived of getting their GST refunds on time after the GST refund monies were diverted into the consolidated revenue account to pay the government's other dues.

And why did they do that? Ah, makes you wonder, right?

And the previous government leaders keep saying that nothing was wrong. They can't even use their common sense to question or understand why the GST refund monies were illegally diverted. Useless fellas, aren't they?

Meerkat: Unlawfully diverted and used for other purposes, instead of refunding to the taxpayers, who are left waiting for their money – which, by the way – has now to be found from other sources.

The petty opposition wants to take this up, just because the word “rob” was used?

They are not worried about where the money went and what it was used for, especially since so much of the people's money has already been embroiled in 1MDB?

No wonder they are now in opposition after ruling for 60 years.

I can understand a moron like Ismail Sabri and the rest of the unintelligent members of Umno and PAS not accepting what Lim said.

But Khairy, someone who is supposedly educated? Should I be surprised? Not really. Khairy to me has always been a slimy opportunist.

When I met Khairy for the first time, I decided that he is not a sincere person during that very brief meeting with him. It was harsh of me to make a judgment about someone so quickly, after having met him for the first time and only for a few minutes.

Now, years on, Khairy has proved that my judgment of him then was right and is still right today.

Hang Babeuf: Listen, Ariff was one of the finest judges this country ever had.

He was good enough to make himself unwelcome to you and your Neanderthal Umno buddies and stooges. How dare you say anything against this man, Khairy!

Did you ever see him in court, presiding? I did. And I can tell you, he was really 'top drawer', the best. Unlike you and your dinosaur mates.