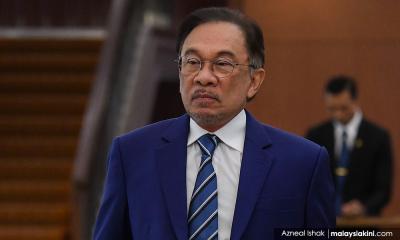 After Azmin's show of force, Anwar claims to possess numbers to be PM

PKR president Anwar Ibrahim has denied that he considers his deputy Azmin Ali a threat with regard to the prime minister's post.

Anwar also claimed to have the support of PKR lawmakers, Pakatan Harapan and Prime Minister Dr Mahathir Mohamad to be the next prime minister.

“So what is the issue?” Anwar told reporters this morning when asked if his call for Azmin to resign if a sex video implicating the latter proved to be authentic and is related to the tussle over the prime minister's post.

“Let me say this... MPs are with me. Harapan has made a categorical stand that there is no change (on who becomes the next prime minister). The prime minister and I have weekly meetings.

“... I have the numbers, I have the support of Harapan and the prime minister. So it is not fair to me or Azmin to indicate otherwise,” he added.

Also present at Anwar's press conference in the Parliament lobby were two of the MPs who had inked a joint statement in support of Azmin - Saratok MP Ali Biju and Puncak Borneo MP Willie Mongin.

The statement from 26 PKR leaders and senior members, including 14 MPs, had also urged Anwar to stop making divisive statements on the matter.

Speculation has been rife that Mahathir and certain powerful personalities aligned to him preferred Azmin (above), who is also economic affairs minister, to inherit the reins.

However, Anwar said the joint statement was not intended as a rebuke to his leadership but a reminder to keep the party united.

“What they mean is to ensure the party doesn’t appear to be too tense, so they reminded that statements I make should have a unifying effect.

“I accept their views, but I also want to explain the context since Malaysiakini reported their views as though it was a condemnation.

“I think it (the joint statement) is positive. I think I need to be magnanimous enough to accept the fact that I need to lead a coherent, united party.

“But that doesn’t in any way create any threat, break up, or dissension. Willie was very clear about it. There is no indication whatsoever,” he said.

Up to Anwar to mend the schism in PKR, says Zuraida