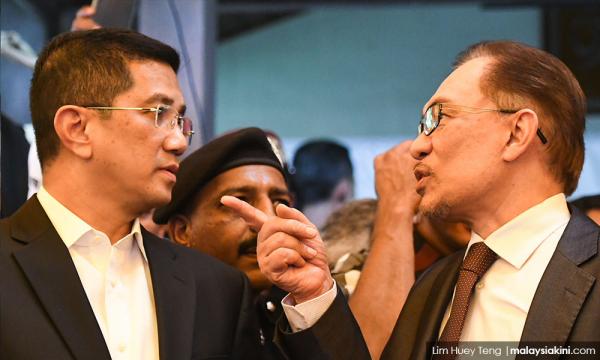 A total of 26 PKR leaders and senior members, including 14 MPs, have urged their party president Anwar Ibrahim to stop issuing remarks that can split the party.

In a joint statement this morning, the leaders said Anwar, as the president, should urgently unite all members in the interests of PKR, Pakatan Harapan and the country.

At the same time, the leaders also pledged support for PKR deputy president Azmin Ali, who is implicated in a sex video scandal. Azmin has vehemently denied involvement.

The signatories of the statement comprise 22 central leadership council members.

"We reiterate that the party must stand firm against the kind of gutter politics used against Azmin.

"We will stand with Azmin and any other leader who is attacked using such unethical methods," the leaders said.

"We urge Anwar, as the party president, to stop making such divisive statements.

"We call upon him to work instead to unite the party in the interest of our members, Harapan and our country."

The PKR leaders were responding to Anwar (photo), who yesterday suggested that Azmin must resign as economic affairs minister if ongoing investigations find him guilty of being involved in the alleged sex videos.

Top of the list of leaders who signed the joint statement were three of PKR's four elected vice-presidents – Zuraida Kamaruddin, Tian Chua and Xavier Jeyakumar – as well as Saratok MP Ali Biju, who is one of the three appointed vice-presidents.

When approached at Parliament, Maria said the prime minister-in-waiting should have waited for police to complete their investigations into the sex scandal before issuing such comments.

“I don’t think it’s useful for him to say that... we are saying wait for the police investigation, so that should be the end of the story,” she told Malaysiakini.

In the interest of party unity

Beyond urging Anwar to call for unity, the leaders also reminded him to defend Azmin as he himself was more than 20 years ago.

"As Azmin has stated a categoric denial of the video, he (Anwar) should, as the party president, stand by his deputy in the interest of party unity – and not seek to undermine him using speculation.

"Anwar should remember that since Reformasi, the party has defended him against identical tactics using sex videos and other means of gutter politics, even when the police chief in 2011 declared a sex video implicating him as genuine," said the leaders.

"He should remember that Azmin has defended him and his family for more than 20 years against the same type of gutter politics," they stressed.

Responding to Anwar's remarks, Azmin said yesterday that Anwar should look in the mirror.

The police are investigating those responsible for making and circulating the sex video.

They have arrested several individuals, including former Santubong PKR Youth leader Haziq Abdullah Abdul Aziz, as well as an aide to Anwar, to facilitate their investigations.

After Azmin's show of force, Anwar claims to possess numbers to be PM

Up to Anwar to mend the schism in PKR, says Zuraida