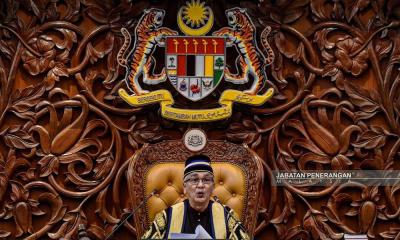 Speaker bans usage of the word 'robber' in Dewan Rakyat

This followed opposition lawmakers pressing for a ruling on whether Finance Minister Lim Guan Eng's claim that the GST trust fund was "robbed" fell afoul of the Dewan Rakyat decorum.

"I never said the word 'robber' is allowed. In fact, many words used in the House should not be allowed at all," the speaker said.

"This includes 'p****k', 'podah' (go away), and asking people out for fights and (threatening) to punch. These are words that breach the Standing Orders.

Ismail Mohamed Said (BN-Kuala Krau) had called for a ruling on whether it was appropriate for Lim to have used the word 'robbed' last August.

Shahidan Kassim (BN-Arau) then stood up and said: "If Bagan (Lim) refuses to retract the word 'robbed', then I am not going to retract 'communist' against DAP."

A quarrel then erupted in the House, with Ismail calling Willie Mongin (Harapan-Puncak Borneo) "p****k" and the latter telling him to "podah."

Lim and Prime Minister Dr Mahathir Mohamad were both present in the House during the hour-long spat.