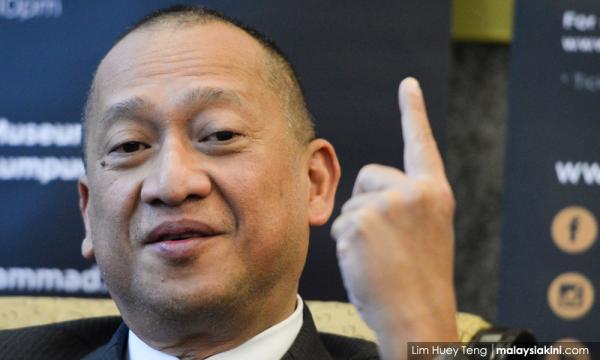 Nazri: Sack us, but see what happened with Muhyiddin and Shafie

Padang Rengas MP Nazri Abdul Aziz has challenged the Umno leadership to sack him and others who have criticised former prime minister Najib Abdul Razak's appointment as BN's adviser if it is unhappy with such comments.

However, Nazri reminded Umno about its previous decision to act against then Umno deputy president Muhyiddin Yassin and then Umno vice-president Shafie Apdal in 2016, who went on to form their own parties and helped end BN's 61 years in power.

"I do not fear. If they want to cast us out, then cast us out. I did not attack the Umno president.

"If they want to punish me and (Rembau MP) Khairy Jamaluddin because we (spoke out of) love (for) the party, then punish us and see history repeats.

"They cast out Shafie Apdal and Muhyiddin Yassin. We thought they had no influence, but looked what happened," he told a press conference after the Padang Rengas Umno division meeting in Perak.

Muhyiddin and Shafie faced action after they questioned Najib, who was at the time the Umno president, over allegations of grand corruption.

Muhyiddin, with the help of former Umno leaders, formed Bersatu which together with its Harapan partners captured federal power, while Shafie formed Warisan which, together with Harapan, formed the Sabah government.

Following the change of government, Najib (photo) is now facing 42 charges of money laundering, criminal breach of trust and abuse of power.

Both Nazri and Khairy have spoken out against Najib's appointment as BN's adviser. Nazri had invited Khairy to officiate the Padang Pengas Umno division meeting.

However, at the press conference, both Nazri and Khairy stressed that they won't leave Umno on their own.

"It is not just one or two offers, we have received many offers but we remain in Umno," said Khairy.

Nazri also panned Najib's "Malu Apa Bossku" campaign in a bid to rebrand himself following his fall from grace.

"Bossku is not a political party, it is something childish and just for fun that won't translate into votes," he said.

He added that if Najib loved Umno, he should distance himself.

"He claims the (graft) allegations against him are slander but the prosecution is ongoing, so respond in the courts, not on the streets.

"Leave the party to the new leadership," he said.