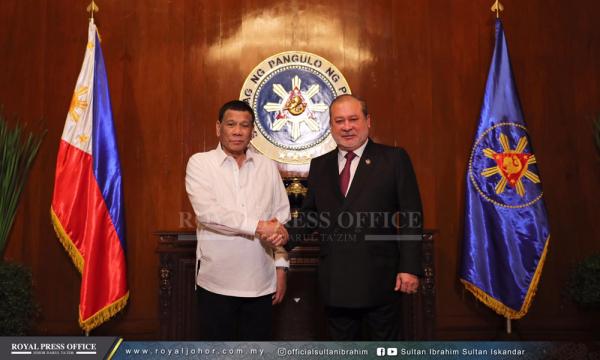 Sultan Ibrahim Sultan Iskandar of Johor has conferred a datukship on Phillippine President Rodrigo Duterte following a visit to the country.

Duterte, in turn, conferred on the ruler the Order of Sikatuna – the Phillippines' highest national order of diplomatic merit, which carries the title 'Datu'.

"The conferment of the award took place at Malacañang Palace, when the Johor ruler called on the president as part of his visit to the Philippines at the personal invitation of the president.

It said the meeting, which took place yesterday, saw the president and ruler engage in closed-door discussions for nearly an hour.

"His majesty and the Johor delegation, comprising several senior state officials, were also feted to a banquet by the president and exchanged mementoes, with President Duterte presenting Sultan Ibrahim with a hand-painted portrait of the Johor ruler," it said.