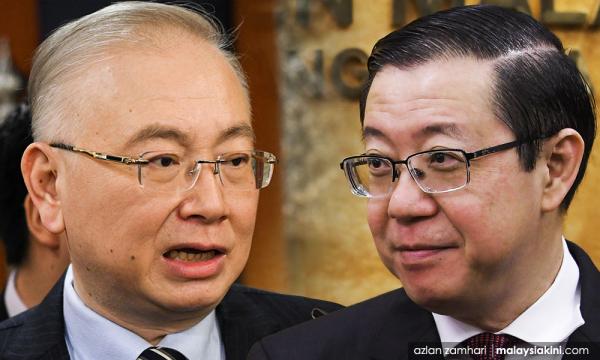 PARLIAMENT | The government is mulling a reduced congestion charge once the concession for the highways it is taking over expires for maintenance purposes, but the opposition is branding such a move as a case of "toll forever".

Addressing a question from Wee Ka Siong (BN-Ayer Hitam) during Minister's Question Time, Finance Minister Lim Guan Eng detailed to the Dewan Rakyat the savings road users will enjoy under a "congestion charge", which will be lower than the current toll collection, once the government takes over four private highways, as there is no longer a profit element.

Lim also suggested that the congestion charge would be further reduced at the end of the concessions, but this did not please Wee, who branded it as "toll forever" because, under private concessionaires, tolls are abolished when the concession expires.

Outside the Dewan Rakyat later, Wee continued to hammer on the issue.

"Last time, they promised toll-free, that tolls will be abolished. Now not only are they unable to fulfil their promise and instead rebranded (toll) to the congestion charge, but could now collect them even when the concession expires.

"This means, for example, if the concession for Kesas expires in nine years, instead of becoming free after nine years, there would be toll forever," Wee told journalists at the Parliament lobby.

Later, Lim also had to elaborate on the issue outside the Dewan Rakyat.

He pointed out that under the private concessionaire model, even though their concessions are about to expire, they were continually extended by the previous government, therefore road users were paying full toll rate for an extended period of time.

"It's like playing dirty, you're shifting the goal post... but now (under government ownership) the concession will end when it ends and then the rate will be significantly reduced," he told journalists at the Parliament lobby.

Lim acknowledged that while the concession will end on time under the government, there could still be congestion charges at a "very reduced rate" for operational and maintenance reasons, which he said the government will seek to absorb if it is financially viable.

"That one I will be very frank with you, I am saying that it will be at a very reduced rate... Because it's about maintenance, but that one is minimal compared to the finance and construction cost.

"I can't speak on what is going to happen nine to 23 years from now, but our intention is by that time, if we are still around (as the government), and if the government finances improve, then we should be able to abolish (completely)," he said.

The government is in the midst of taking over four key highways from private owners, namely the Sprint Expressway, the Damansara-Puchong Expressway (LDP), the Shah Alam Expressway (Kesas) and Stormwater Management And Road (Smart) tunnel for RM6.2 billion.

Explaining in the Dewan Rakyat earlier, Lim said the government will finance the acquisition through bonds, which will, in turn, be paid through the collection of a "congestion charge".

However, he said the government could offer up to 30 percent discount on the congestion charge compared to regular toll, depending on peak and non-peak hours, as the government does not seek to profit but only to cover the bond repayment and maintenance cost.

The concession for the highways will expire between nine to 23 years, after which the government may finance its maintenance through taxpayers funds or continue to impose a congestion charge at a low rate.

Lim said the road users will save RM180 million annually under the new state-owned model for the four highways while Putrajaya could save at least RM5.3 billion in compensations it has to pay to the concessionaire to freeze the current toll rate, which goes up progressively under a schedule.