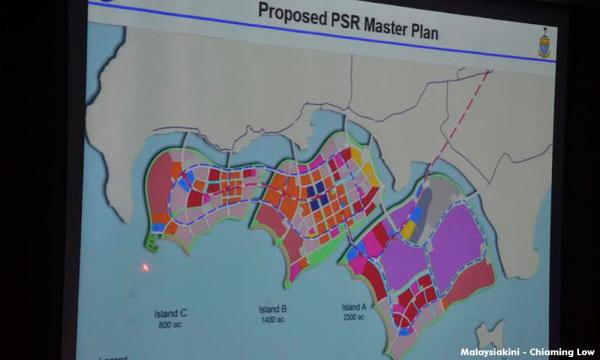 On what basis was the PSR's EIA approved?

COMMENT | The Consumers’ Association of Penang (CAP) and Sahabat Alam Malaysia (SAM) are most dismayed to learn that the Environmental Impact Assessment (EIA) for the Penang South Reclamation (PSR) project has been approved by the Department of Environment (DOE).

We understand that 72 conditions have been imposed by the DOE for approval. We call on the state to make public these conditions without delay.

We are alarmed that our comments and that of other civil society groups, including members of the public, have been pushed aside by the DOE, for we had called for the EIA approval not to be given due to the fundamental concerns that we had raised.

Among them were the following:

A clear statement of purpose and need for a project is paramount in an EIA. However, the EIA of PSR has not provided such justifications. The original justification by the project proponent for the PSR is to sell the reclaimed land to fund the Penang Transport Master Plan (PTMP). However, this “statement of need” is not articulated at all in the EIA. Instead, a vague statement of other “needs” is used to justify the PSR, such as “delivering high impact results over the long term to resolve land supply, economic, social and related issues to the benefit of the rakyat". We had pointed out that if the concern was to address land supply, the proposed future growth of Penang can and should be planned on existing land already owned by the state government, for instance, in Batu Kawan and other vacant areas in Seberang Perai.

There are serious impacts on the fishery resources and the livelihood of fishermen. Fishermen from this area and also other areas depending on the fisheries stock derived from the southern part of Penang Island will be worse off if the proposed project is approved and implemented. There are about 1,500 small-scale fishermen, besides their families, whose livelihoods are going to be affected by this project. As it is, the inshore fisherfolk have already felt the impact of dwindling fish catch due to the construction of the Second Penang Bridge arising from the deterioration of water quality and the shrinking of available fishing ground. We had pointed out that the fishermen's community is being wiped out as well as the fishing industry itself south of Penang Island. All the alternatives proposed for the fishermen in the EIA are unreasonable and unrealistic, devoid of empathy for the fishing community.

Landing and nesting ground of the Oliver Ridley turtle will be wiped out. The EIA states that there are records of the Olive Ridley Turtle landings, including the Green Turtle (Chelonia mydas) at Teluk Kumbar, Gertak Sanggul, Pantai Medan, Teluk Tempoyak and Pantai Belanda. These turtles are natural assets which should be protected by the state and Malaysia. Sea turtles play vital roles in maintaining the health of the oceans by maintaining healthy seagrass beds and coral reefs, providing key habitat for other marine life, helping to balance marine food webs and facilitating nutrient cycling from water to land.

While the EIA recognises the negative impact on the sea turtles, it is regrettable that the EIA also dismissed the importance of these existing landing areas by merely stating that there is a “possibility of the turtles finding an alternative nesting site if the original site had been disturbed by human activities”. Such a statement assumes that there would be a suitable alternative site available for the turtles to land, passing on the responsibility and downplaying the fact that there already exists a thriving turtle landing site. Essentially, this Environmentally Sensitive Area (ESA) would be completely wiped out by the PSR - but it was justified as merely a “trade-off”.

Incomplete assessment of sand mining impacts. The EIA falls short of making available the environmental impact assessment of off-site sea-sand mining (which will be in the waters of Perak) and quarrying of rocks in all the areas identified as sources of supplies to PSR. The impact of sand-mining and the transportation of these sand supply to the PSR site is part and parcel of the reclamation project and must not be evaluated separately. The combined impact on the waters south of Penang Island and the fishing activities (and navigation) is compounded by these two main components of the PSR project.

These are among the fundamental issues that we had raised as to the shortcomings in the EIA. How the EIA has been approved despite these flaws is inexplicable and unjustified.