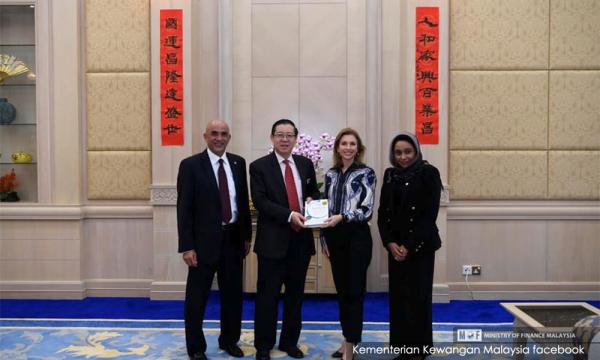 YOURSAY | ‘We shouldn’t begrudge other races who also want peace and prosperity for the whole nation.’

Casey: ‘Duilian’ is nothing more than a couplet of poetic, and contrasting words or phrases, consisting of an upper and a lower link. It has no religious connotation.

Like the English poetries and Malay ‘pantun’, it is a form of literature that uses aesthetic and rhythmic qualities of the language - the beauty and charm associated with the sounds, and the rhythmic structure of certain words or phrases - to evoke meanings in addition to, or sometimes in place of, their natural and ostensible meaning.

Often, the author of ‘duilian’ tends to exhibit not just his poetic skill, but also his mastery in the Chinese calligraphy.

As far as I can make out, the sentence on the right side of the photo says: “Unity underpins prosperity for families and businesses.”

While the sentence on the left reads: “As society prospers, the nation progresses.”

Pakatan4Life: The couplet should not have become such a big issue in the first place as the wording means peace and prosperity for the nation.

Only the Umno and PAS bigots are creating a fuss out of nothing as they are running out of ideas and issues which they can find fault with.

Honma: It does not matter; whatever the language, such messages are meant for good vibes and positive thinking.

It applies to all humankind, regardless of race, creed and religion. That it is in Chinese characters doesn’t mean Finance Minister Lim Guan Eng is turning Pakatan Harapan into a Chinese government.

DoIR: These racial comments will escalate as long as we don’t see ourselves as Malaysians constituting of various races with diverse cultures.

Further, the education system we are having for the last three to four decades, having shifted more towards religious education as acknowledged by our prime minister, could have generated these not-so-knowledgeable religious ‘products’.

In addition, the news report, ‘Iron Lady: Don’t teach school students divisive ideas’, further reaffirmed the fact that our education system has got a big problem.

Mr Education Minister, I hope you can rectify this without delay.

Hearty Malaysian: In Malaysia, there are Muslims who accept and respect multicultural Malaysia naturally without much fuss but unfortunately, they are drowned out by those who propagate political Islam and racial supremacy.

Do we still remember the Muslim laundry shop case in Johor or the hoo-ha over the cross-looking lights on an apartment in Penang?

Now a Chinese couplet hang in Finance Ministry office is being made an issue. Where does this end? Respect for a religion is also built on how its followers behave in their daily life.

Anonymous One: The hate culture is on the rise, propagated by a small group of Muslim fanatics. It's about time moderate Malays voice their disapproval of the so-called protectors of Islam.

But, then again, moderate Malays don't want to be seen and labelled as being lesser Muslim when going against these fanatics. So, the ‘Malay dilemma’ continues...

They are not going to stop using it anytime soon.

Steven Ong: ''Asri warned that by doing so, non-Muslims would assume that Islam teaches its adherents to hate without reason.''

Yes, you are right this time, but tell us the reason why a Muslim cannot listen or hear a non-Muslim share his or her testimony on his/her religion?

There is a reason why many Muslims hate non-Muslims and it’s your job not just to remind them but find out why they do so.

Cogito Ergo Sum: Asri, are you trying to gain support and sympathy to save your downward spiral in popularity?

But do not do this at the expense of another fellow Malaysian or ethnic group. We are tired and fed up of divisive politics and implied insults when there are none.

This was a trend and fashionable in Umno/BN’s Malaysia which the people threw out and rejected. Please Asri, be relevant to the current state of politics.

Mohd Isnin: While you tell us, Muslims, not to sow enmity towards non-Muslims but you invite Zakir Naik, the hate preacher, and groom Mohammad Zamri Vinoth, an Indian convert, to do your hate mongering.

You have also on record condemned other religion. ‘Cakap tak serupa bikin’.

El DeeCee: I believe Asri’s call is to his fellow Muslims not to spread enmity towards Islam by focusing on the Chinese couplet in Guan Eng's office.

However, I believe he should share the same advice with his good friend Zakir Naik, who has been doing nothing but spread enmity by ridiculing other religions.

The Wakandan: Well, Perlis mufti, there were lots that your people did that sowed enmity towards Islam.

You may disagree on this one episode but you were also responsible for others that put Islam in a negative image.

We really want to see the righteous, fair and compassionate Islam, and that is hard to come by from the people in positions who can show them. You have lost credibility somewhat on this subject.

Rembrandt: At this moment in time, our country will need all the good blessings that we could get as we navigate the hard times ahead of us.

We shouldn’t begrudge other races who also want peace and prosperity for the whole nation. Don’t be so petty over every little thing.