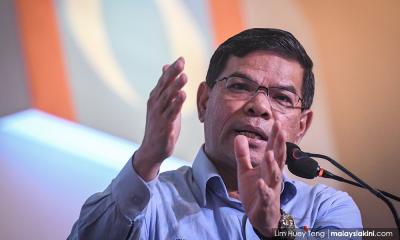 As Saifuddin told a press conference in Putrajaya today, potential action against Santubong PKR Youth chief Haziq Abdullah Abdul Aziz will be on the table at the meeting.

When asked whether action against Azmin will also be brought up, however, he said that he has no control over what the political bureau will discuss.

"As the secretary-general, I have no control what the political bureau members are going to discuss," he said.

Similarly, Saifuddin said the political bureau may also discuss the accusation that the contact numbers of the party's branch leaders were leaked for the purpose of circulating the sex video.

He also noted that he has not been summoned by the police to give his statement on the matter.

Azmin did not attend the political bureau meeting last Wednesday when the sex video scandal was first discussed.

That meeting took place just a day after Haziq (left in photo) confessed to being one of the two individuals shown in the clips, and named Azmin as the other.

The deputy president has denied the allegation, and said that it is part of a campaign designed to put an end to his political career.

'PKR doesn't have expertise of the cops'

Saifuddin also brushed off the accusation that PKR failed to show leadership in its handling of the scandal.

"Has any action been taken by the PKR leadership? Yes, we issued a statement that we leave it to the police to investigate," he said, adding that the party can only act after the probe is complete.

"We can't hurl more slander (at Azmin) when the police are still investigating the case."

Saifuddin also pointed out that PKR does not possess the expertise of the police and the Communications and Multimedia Commission to conduct an internal probe.

"Which agency has the expertise to initiate a probe like this? We heard that the forensics team of the police and the MCMC have such expertise.

"Now, who in PKR possesses such expertise to probe this? You have to be fair to PKR.

On Azmin claiming yesterday that party insiders leaked the sex video to PKR members and the media, Saifuddin noted that the political bureau meeting should be the channel to discuss the matter.

To a question, he also said that PKR would not ask Azmin to take a holy oath (sumpah laknat) to prove his innocence.

"The matter is more for Malays, instead of a matter for Islam," he said.

In case wrongdoing is found, Saifuddin assured that Azmin would not be sacked in the same manner that Anwar was in the late 1990s.

When asked if PKR can resolve the scandal by itself or bring the matter to Pakatan Harapan presidential council, Saifuddin again said that this would depend on the outcome of the police investigation.