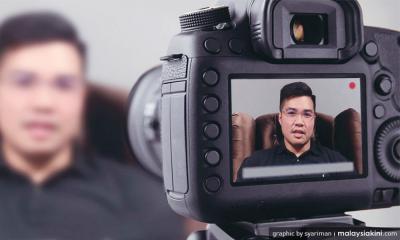 Anwar's aide - If PKR acts on 'confession', Azmin will be in trouble too

Should PKR act against Haziq Abdullah Abdul Aziz based on his confession, then it would have to train its guns on deputy president Mohamed Azmin Ali as well, according to party president Anwar Ibrahim's aide.

"Remember, Haziq not only confessed to being the individual in the (sex) videos, he also confirmed that Azmin was the individual with him in the videos,” R Suresh Kumar told Malaysiakini.

Suresh, who is Anwar's private secretary, said this is the reason PKR is waiting for the outcome of the police investigation before taking action.

He was responding to Azmin's adviser Khalid Jaafar, who yesterday said that failing to act against Haziq would be perceived as a failure on the part of the leadership, especially its president.

However, Suresh (photo) described Khalid's remarks as “shocking and immature."

Earlier today, PKR vice-president Zuraida Kamaruddin said she would demand Haziq's sacking during the political bureau meeting, which is slated to start at 5.30pm this evening.

Zuraida, who is known to be a close associate of Azmin, said it is unwise for the party not to act against Haziq despite the latter having confessed to indulging in unnatural sex, which is a crime in Malaysia.

In his confession last week, the Santubong PKR Youth chief claimed that the alleged sexual encounter with Azmin took place in the latter's hotel room in Sandakan last month.

Azmin, who is also the economic affairs minister, has described the videos as a nefarious plot to ruin his political career.

He is also convinced that those behind the smear campaign were from PKR.

Last week, unknown individuals had leaked the video clips through WhatsApp groups. Yesterday, another video and an audio clip were uploaded on YouTube.