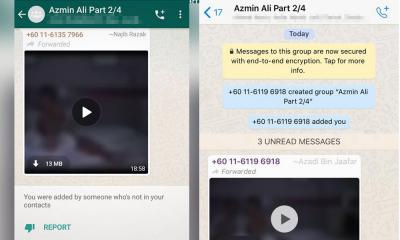 This 1 minute and 29 second video appeared to be set in the same room and involved the same individuals as the first three video clips that appeared on Tuesday morning.

The same modus operandi was used to disseminate the video clips. The anonymous individuals would set up WhatsApp messaging groups and invite PKR personalities and journalists.

Some of these groups were initiated by individuals using pseudonyms. One called itself "Najib Razak" while another was called "Azadi Bin Jaafar".

In all, Malaysiakini is aware of at least five of such groups that have been set up with separate cell phone numbers, all of which had the carrier prefix "011".

The WhatsApp groups appeared to have emerged simultaneously at approximately 6.55pm.

The video clip ended with a text overlay which claimed that the video was recorded at room "2526" at Four Point Hotel, Sandakan on May 11 between 1am to 2am.

The WhatsApp groups are named "Azmin Ali Part 2/4," indicating that the perpetrators are planning to release more video clips.

The video clip was not shared in all the WhatsApp groups.

Azmin, the PKR deputy president, earlier denied involvement in the first three video clips, which were released at about 1.25am on Tuesday.

He described it as a diabolical plot to destroy his political career.

It would appear that the same two individuals appeared in the latest video.

Prior to Azmin's denial, Haziq Abdullah Abdul Aziz, senior private secretary to Deputy Primary Industries Minister Shamsul Iskandar Md Akin, claimed to have been the other man in the video.

I thought sodomy allegations would end with me - Anwar

Anwar leaves it to Shamsul to decide on Haziq's fate

It's not me: Azmin denies sex video, wants to take legal action

Why ask me, Najib dodges poser on sex clip

'US$741k for minister': UEM says no account with Maybank KL

Anwar says he spoke to Azmin 'at length'

Who is Haziq Aziz?

I was in bed with minister, confesses man claiming to be in viral sex clip