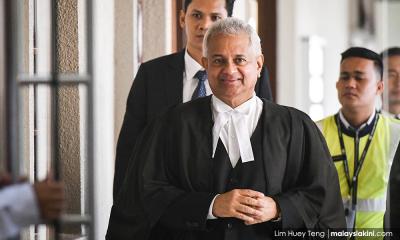 The opposition has demanded the establishment of a royal commission of inquiry on the death of firefighter Muhammad Adib Mohd Kassim.

"We are demanding the RCI for justice, as well as to restore public confidence.

"It is up to the discretion of the government whom it wants to pick to handle the RCI," opposition leader Ismail Sabri Yaakob told a press conference in Kuala Lumpur this afternoon.

The Umno vice-president also accused Attorney-General Tommy Thomas of interfering in the ongoing inquest to determine Adib's cause of death.

This is related to Thomas instructing that lawyer Syazlin Mansor should no longer represent the Housing and Local Government Ministry as well as the Fire and Rescue Department, which led to her withdrawal on Monday.

Claiming that the AG has failed in his role to advise the government, Ismail said Thomas should either resign or be sacked.

Meanwhile, PAS secretary-general Takiyuddin Hassan (photo), who was also present at the press conference, said Thomas should not run the Attorney-General's Chambers like his law firm.

“Why only after five months was Syazlin asked to withdraw? Thomas acted beyond his powers.

“We want to tell Thomas not to run the AGC like his law firm. The AGC has rules and regulations. Do not do things which can erode public confidence,” he added.

Read more: Adib's death: 'Opposition would do same for Maniam or Ah Seng'

Takiyuddin also disputed the reasons cited by Thomas for Syazlin's removal, such as being the wife of the minister's aide.

“This excuse does not make sense... It does not matter even if she is the minister's wife. She was appointed as a professional lawyer on a pro bono basis,” he said.

Prime Minister Dr Mahathir Mohamad has defended the AG over the persistent calls for his head to roll, saying Thomas has a reason for doing certain things.

Yesterday, Thomas said he instructed Syazlin's removal due to conflict of interest, as she was also representing Adib's family in the inquest.

He also indicated that the ministry did not consult the AGC before appointing Syazlin, who is the wife of the press aide to Housing and Local Government Minister Zuraida Kamaruddin.

Thomas said he was informed that Syazlin (photo) took an active part in the inquest, often contradicting the positions taken by the deputy public prosecutors, therefore causing embarrassment in her capacity as the ministry's lawyer.

However, the AG expressed shock that the lawyer also withdrew from representing Adib's family.

On the same note, Thomas explained that Syazlin's withdrawal would not affect the status of forensics expert Dr Shahrom Abdul Wahid, whose findings contradicted that of two other experts.

Shahrom had testified that Adib was pulled out of the Emergency Medical Rescue Services (EMRS) van and assaulted during the Seafield temple riots on Nov 27.

Whereas the other two experts held that Adib fell from the EMRS van, and his injuries were due to being hit by the vehicle when it backed into him in an attempt to escape an advancing mob.

The case had taken a racial slant amid allegations that the government and Thomas were attempting to cover up the issue, a claim which has been repeatedly denied.