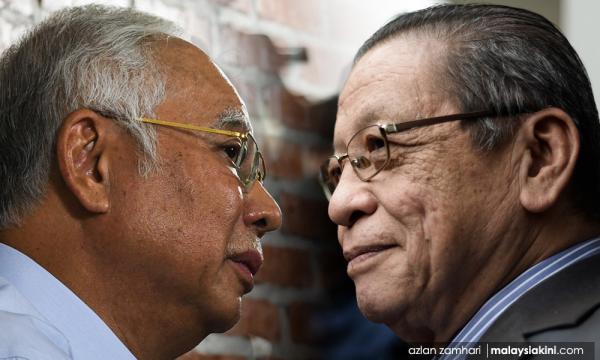 Yoursay: Wise of Kit Siang not to debate ‘Nothing2Hide’ Najib

YOURSAY | ‘Don’t give Najib the publicity and attention he craves.’

The Wakandan: Credit to DAP veteran Lim Kit Siang for withdrawing from the debate. It is a wise decision.

For him to debate with an accused who is undergoing trial for his purported crime would achieve no purpose other than to indulge in self-satisfaction to prove that one is right over the other.

There is clearly nothing which the public already do not know that the debate can reveal. So, it is only an exercise in futility except to give former PM Najib Abdul Razak the spotlight which he craves for in view of his present situation.

Lim is not going to accord him that. Lim does not have to debate Najib because the court and the prosecution are speaking for him.

Najib needs to debate them, not Lim. And good luck with that, especially the notion that the prosecution will be ‘vanquished’.

Existential Turd: By agreeing to debate Najib and then chicken out, for whatever reasons, Lim has handed a golden opportunity to Najib to take pot shots at him and reinforce the perception that DAP has things to hide and is controlling the government.

Najib's accusations do not need to be factual, it is the perception that counts. In terms of playing politics, and despite his long career, Lim has demonstrated tremendous naivete. He is not in the same league as Najib. It takes an immoral and a gullible hand to complete an act of evil.

In this case, I fault Lim for taking part in it. Even though he is an unwilling partner.

We will see in due course if the voters who voted for Pakatan Harapan in GE14 were gullible as well. Judging by what has transpired in the previous year, the prognosis is not very bright.

Vijay47: I heard it from equally reliable grapevine that Lim is indeed fearful of jousting with you on the debating podium, Najib.

It must have finally dawned on him that you are not one to be trifled with when it comes to debates, a skill you no doubt picked up with excellence during those days of yore when you rambled through the hallowed halls of Cambridge, Oxford, and Eton with your loyal second, Arul Kanda, presently of whereabouts unknown.

So lengthy is your catalogue of sterling victories that Lim has every reason to be anxious of tangling with you.

“How does he fear thee? Let me count the ways,” as Elizabeth Browning (and not Juliet) said. Perhaps Browning, like Claire Rewcastle-Brown more recently, had you in mind when she wrote those classic lines.

Even if not, you surely are, like minister Mujahid Yusof Rawa cooed of Muslim preacher Zakir Naik, an inspiration to poets and politicians alike.

It is also possible that Lim retreated when he remembered your heroic performance during the Nothing2Hide show that was matched only by your display at Nothing2Hide II, where the police unsportingly interfered to halt your showdown with Dr Mahathir Mohamad.

Lim may also have been thinking about how you rocked Parliament when you did not even once confront and explain the many false accusations against you and 1MDB.

I am, of course, referring to those occasions when you did grace Parliament with your valiant presence. If my fading memory serves me right, your attendance record at Parliament was all of seven percent. But who’s counting?

There is the other possibility that Lim chickened out recalling your brave though unjolly stand at the Al Jazeera interview where you single-handedly took on Mary Ann Jolley. But I don’t think so, I heard that Lim is still laughing.

Oxymoronictendencies: I can’t imagine why Lim would have even contemplated “debating” with Najib. The only thing that it achieves is to give Najib political credibility.

Why would anyone want to do that? Utter madness. Lim should know better. I am glad to hear more sensible minds have sorted him out.

Ed: Indeed, Lim did the right thing calling off the debate. Najib must not be given any platform to try and distract the people from the court case currently underway. This is a classic distraction tactic.

Clever Voter: Najib thinks he is a hero or at least pretends to be a champion to religious or racial causes. Better-informed urban constituents do not think so.

He brings shame, a delusional man yet at times he shows he is not ignorant nor unaware. This is the man who is prepared to lie to save his skin. He is capable of losing his cool yet he remains unashamed and unmoved.

This is the man who has never got his hands dirty and obviously enjoys his decadent lifestyle. At his age, going to jail isn't what he has in mind.

So, as what other rogue politicians do, he throws money to win support, raises the stakes to ensure he wins, and blame others for his troubles.

He isn't worth to be debated with. He is a winner among his supporters but not those who are sensible and reasonable.

Hope: Lim, thank you very much for not proceeding to debate with that kleptocrat. Withdrawal showed that you are truly a statesman who put nation and rakyat's well-being above self.

Let that kleptocrat and his cronies spin and say what they like about your decision to withdraw. What matters most is the rakyat stood steadfast with you to overthrow that kleptocrat in GE14.

As we subscribe to the rule of law, let the courts deal with that kleptocrat accordingly.

True Malaysian: Yes, never give Najib the publicity and attention he craves. He is totally irrelevant now. So don't make it any more relevant than the criminal court cases he's in.

He is a total embarrassment and disgrace to the people and country. From his words and actions, he has continued to act as though he is innocent and done nothing wrong.

I think he's given too much leeway and freedom to do what he is doing now.

Kamikasi: Once your case with the court is complete, I would like to debate you too. Najib is a master liar and a spin master. He is a despicable and a shameless character. To debate him is to bring your good self to his level.

It’s a waste of time as he will not be a gentleman but will bring up irrelevant issues to incite the Malays. Lim is wise not to be lured by this man.

The many well wishes show Lim has the sympathy and support of the people. Sorry Najib, your game plan is over.

Evin K: Mark Twain once said - Never debate with stupid people, they will drag you down to their level and then beat you with experience.