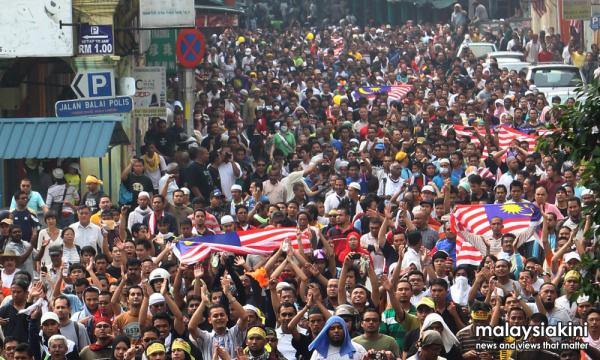 YOURSAY | ‘A person can be a Malay, Chinese, Indian, Kadazan, Dusun, Iban, Dayak… and still be a Malaysian.’

Existential Turd: According to Umno vice-president Mohamed Khaled Nordin, because the people (read: the minorities) would never assimilate into a single race, it is impossible to implement the concept of Malaysian Malaysia.

On the contrary, it is the ketuanan Melayu concept that champions assimilation of other races.

A person can be a Malay, Chinese, Indian, Kadazan, Dusun, Iban, Dayak or any other ethnic group, and still be a Malaysian.

Khaled still cannot give up his cherished ketuanan mindset, where some people (read: the Malays) are more equal than others.

It is Khaled's implicit concept of Malay-only Malaysia that is impossible to implement.

Malaysian Malaysia is difficult to implement but not impossible. It is difficult because there are people like Khaled who wilfully misrepresents a progressive concept and continue to mislead his right-wing base.

Newday: Khaled, you still do not or refuse to understand the concept of ‘Malaysia for all Malaysians’.

No one has ever talked about having all assimilated into one race, and I am unsure how this could happen unless we do a massive amount of DNA adjustment that is beyond science at this time.

The aim is to have all citizens existing – in theory – on the same footing and being provided with equal opportunities.

Many nations have a racially diverse mix, but all are treated equally when it comes to education, health and business. There is no formal discrimination. In these countries, it is also written into law.

Help is provided by the government for certain marginalised groups such as Orang Asli-equivalents and low-income earners, but that is it.

Here, we still have straight-up apartheid. My family is Malay, but to this day we are Malaysian first, not Malay first.

We have sons and daughters that have, and still are, successful in what they do, not from handouts, dodgy scholarships or cronyism, but through hard work.

That is all we want – even up the playing field, end this overwhelming tide of slackness engulfing the majority of Malays through the application of apartheid principles and get on with building a Malaysia for all.

Asitis: Khaled has failed to understand (or he deliberately pretends not to understand) that there is a difference between race and nationality.

We can all be of different race or ethnicity but in terms of nationality, we are Malaysians –people of the nation of Malaysia. Malaysian is a nationality, not a race.

To give another example, in the US there are people of various races originating from the European continent, and there are Chinese, Japanese, Indians, et cetera from Asia, and so on.

But they are all Americans, citizens of the US, with equal rights guaranteed by their constitution.

But coming from Umno, it is probably too much to expect that Khaled would understand this.

CKL: Many races, one nation. Too difficult to understand?

No country in this world has only one race. The strongest and most prosperous countries accept immigration, people who are racially different from them. There is no forced assimilation.

CH Y: Umno, please read Article 153 of the Federal Constitution clearly – it says ‘special position’ and not ‘special rights’; and the word ‘reasonable’ on the quotas.

This means the Agong through the prime minister and his/her cabinet introduces policies so that the position of Malays in Peninsular Malaysia and natives in Sabah and Sarawak are not squeezed out.

This is to promote economic equality and not economic wastage.

Article 153 does not say all Malaysians have different classes. The Agong merely protects your position and you do not have special rights.

Go read the wording and not distort the constitution.

Truthseeker: Khaled, you mean to say Malaysia will never have equality for all races as the Federal Constitution allows discrimination?

Now I understand why the International Convention on the Elimination of All Forms of Racial Discrimination (Icerd) is not ratified.

To give up and succumb to Umno bigots and racists? To accept apartheid in this country? Never!

Anonymous_a8637586: In this day and age, this particular line of thought should really be condemned.

Back during independence, certain privileges were understandable, but it doesn’t extend to this amount of discrimination. People should fight and be proud of equality.

Here in Malaysia, people are proud of racial segregation.

Umno has never been consistent in its stand but only which narrative suits its own personal agenda. It has always been "heads I win, tails you lose" kind of rule.