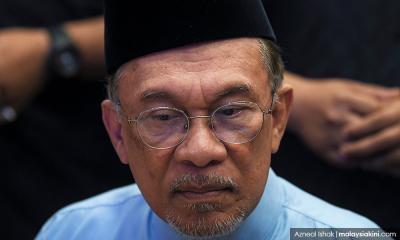 Anwar: Kit Siang was right to withdraw from debate

"Kit Siang is not a coward. From what I see, a lot of friends are advising (us) that it (the debate) is inappropriate at this time.

"There are fears of racial tensions. (Withdrawing) is a good decision," he told reporters in Port Dickson, according to Berita Harian.

Anwar also brushed off suggestions that he replaces Lim for the debate.

Lim has a reputation of often criticising Najib even though the latter is no longer prime minister.

Following these repeated criticisms, on Tuesday, Najib challenged Lim to a "freestyle" televised debate on any topic to which the latter promptly accepted.

Lim then proposed the topic "How Malaysia became a global kleptocracy and how we can become a leading nation of integrity" to which Najib agreed.

Two days later, Lim said he was withdrawing from the debate as he had received a lot of advice against it from his supporters.

His chief reason was that a debate between himself and Najib might be turned into a "Malay versus Chinese conflict".

To this, Najib accused Lim of making excuses.

"Is this an admission by Kit Siang that DAP is a Chinese party?

"This is a debate between two parliamentarians. Nothing to do with race," wrote Najib on his Facebook page.