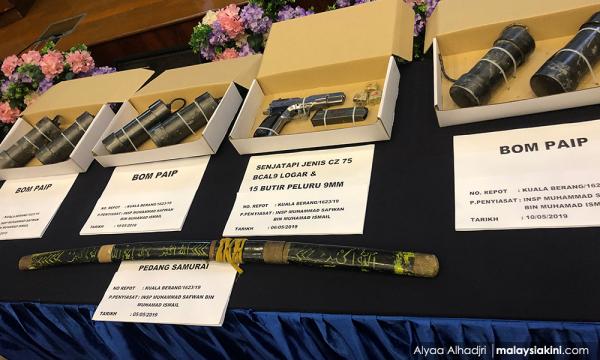 Police have arrested the three remaining members of an Islamic State cell which was planning to carry out assassinations and terrorist acts to avenge the death of firefighter Muhammad Adib Mohd Kassim in a riot last November.

According to Inspector-General of Police Abdul Hamid Bador, the three suspects – two Malaysians and an Indonesian – were picked up in Kedah and Selangor on May 14.

This followed the arrests of four suspects, including two Rohingya, in Terengganu and the Klang Valley between May 5 and 7.

In a statement today, Hamid said the two Malaysian suspects were picked up in Kuala Muda after their families turned them in.

"Both were nabbed when their respective families turned them in to the police, after they were listed as wanted the day before. One of the suspects worked as a burger seller, while the other was a farmer.

"Both of them, together with a fellow Malaysian on Nov 22 last year in Sungai Petani, had undergone training to make bombs in Jogjakarta last year, organised by the Ansharut Daulah terror group in Indonesia," the IGP said.

"While there, they learnt the methods of making triacetone triperoxide (TATP), a type of chemical used to produce huge-scale explosives and vehicle bombs. Both suspects also scouted several churches in Jogjakarta in view of launching attacks.

"Apart from that, one of the suspects also planned to launch attacks on non-Muslim houses of worship in Malaysia, by launching suicide bomb attacks," he added.

According to Hamid, the Indonesian aged 34 was arrested in Banting after a public tip-off.

"The suspect was a member of the IS 'wolf pack' cell, members of which were arrested on May 5 and 7, and was involved in planning killings and attacks on Christian, Hindu, and Buddhist houses of worship, as well as entertainment centres in the Klang Valley.

"The suspect was exposed to IS ideology while serving a five-year jail sentence in Surabaya," he said.

Hamid added that all suspects are being detained under Section 574 of the Penal Code, and investigated under the Security Offenses (Special Measures) Act 2012.