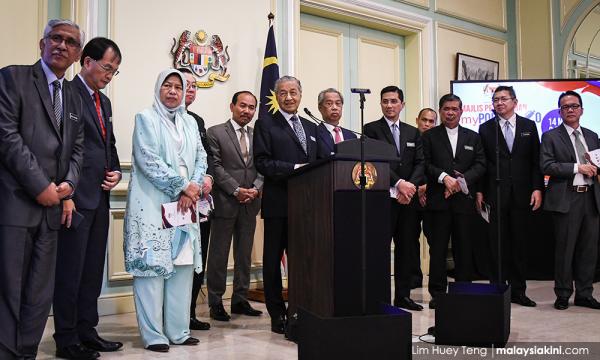 He said all ministers must also ensure that members of the administration under their ministries declare their assets to the MACC.

“All ministers and deputy ministers, and we will also extend it to all members of parliament, even if they are in the opposition,” he said in a press conference held after chairing the eighth Cabinet Select Committee on Anti-Corruption (JKKMAR) in Putrajaya today.

Mahathir added that all ministers must also draw up and implement a policy on accepting gifts in their ministries.

He said the ministers must sign an undertaking to issue the instruction and ensure the policy on accepting gifts is implemented.

"Now you cannot accept a lot of gifts, when I was the (fourth) prime minister, I received 26 cars, so I returned them. If you want to see, go to (Galeri Perdana) Langkawi," he said jokingly.

Mahathir said at present members of the administration cannot accept gifts worth more than RM500, but they can accept gifts in the form of food and flowers.

"They wanted to send me one tonne of dodol. They have sent so much so I had to redistribute. I don't know whether that is corruption or not," he said in jest.

Mahathir said all ministers must implement the anti-corruption plan at their organisations and ensure it is successfully developed.

The ministers must also chair a meeting to enforce governance, integrity and anti-corruption at the ministry level at least twice a year, he said.

Mahathir added that every minister must also ensure the transparency of procurement and reduce the risk of corruption in their ministries.

He said the ministers must make sure that the information of the person who submits the successful tender through the open tender system and approved by the Ministry Procurement Board for all categories of procurement is displayed on the myProcurement portal.

Asked who will monitor these initiatives, Mahathir said the GIACC will carry out checks based on complaints from the public.

He said the JKKMAR meeting will be held each month as the government feels that corruption was a crime which could hinder national development and requires action from various agencies and every member of the administration.

“Everyone plays a role in preventing corruption and must know what they can do to prevent it because we have meetings to check the reports of the progress that has been made,” he said.