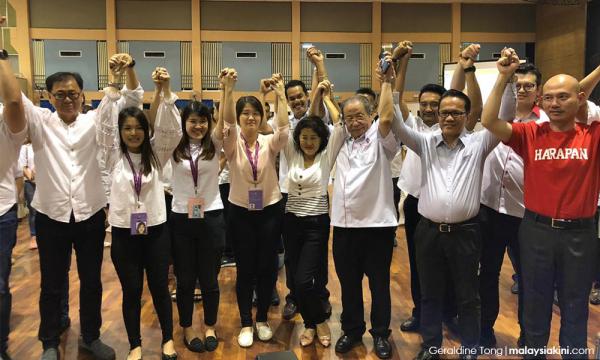 National implications of the Sandakan by-election

Sandakan also provides some important lessons and implications for Harapan at the national level. To deliver Sandakan’s ‘winning formula’ to other parts of Malaysia is definitely more challenging, but not impossible.

The expectation was that with a reduced turnout, DAP would have its majority of approximately 10,000 votes from GE14 cut significantly.

But despite overall turnout falling from 71.9 percent in the 14th general election to 54.4 percent, DAP managed to increase its vote share by 7.4 percent from 66.8 percent to 74.2 percent in the by-election.

With this increase in vote share and the presence of independent candidates which siphoned away 5.1 percent of total votes (presumably from PBS), DAP was able to increase its majority to 11,521.

The increase in majority caught many, including myself, by surprise.

This was achieved through a slight increase in the level of Chinese support, from 90 percent to 95 percent, and more importantly, increasing the level of support among Sabah bumiputera voters by 10 percent, from 43 percent in GE14 to 53 percent in the by-election.

In a constituency that is approximate 51 percent Chinese and 49 percent Sabah bumiputera, this translated into an increase in vote share of approximately 7.4 percent.

In the nine Chinese-majority polling districts (60 percent or more Chinese voters), DAP increased its vote share by 5.3 percent, from 81.6 percent in GE14 to 86.8 percent in the by-election.

In the eight non-Chinese majority polling districts, DAP increased its vote share by 6.8 percent, from 60.1 percent to 66.9 percent in the by-election.

What was achieved in the Sandakan by-election was indeed surprising. In the context of a significantly lower turnout, it was not expected that DAP’s winning majority would be bigger than in GE14.

The ‘disappointment’ of the Chinese community, over some of the promises contained in the Harapan election manifesto that have yet to be implemented, did not materialise.

Rather, the level of Chinese support actually increased slightly to approximately 95 percent, a level which Harapan only achieved in 12 out of 24 parliamentary constituencies with more than 50 percent of Chinese voters in GE14.

The reasons for DAP’s surprising margin of victory include:

The key question to be asked post-Sandakan is whether this 'winning formula’ can be applied to other parts of the political arena in Malaysia.

Caution should be urged in blindly extending the Sandakan success to campaigns in other parts of Malaysia.

Firstly, voters in Sabah, including the Sabah bumiputera voters, have a long history of switching political allegiances, especially in the context where a political party or coalition is no longer in power.

This result eventually forced PBS to rejoin BN just prior to the 2004 general election. Warisan, DAP and PKR were beneficiaries of this switch in allegiances in the run-up to the 2018 general elections.

The same cannot be expected in the peninsula, since Umno and PAS still maintain their respective support base, even though both are out of power at the federal level and in all states, except for Perlis, Pahang, Kelantan and Terengganu.

Taking on a weakened PBS in Sabah is a different proposition from taking on the combined forces of Umno and PAS in Peninsular Malaysia.

The issues of race and religion, which seems to have less salience in Sabah, definitely take on greater political significance when played up in the peninsula by Umno and PAS.

It may also not be realistic to expect that the other Malay menteris besar (with the exception of Mukhriz Mahathir in Kedah) will be able to deliver the Malay votes in the same manner that Shafie was able to deliver the Sabah bumiputera votes, especially among the Bajau community.

Shafie is a known quantity in Sabah, and was an influential state politician holding an important federal post when he was one of the vice-presidents of Umno.

The newer menteris besar in Johor, Malacca, Negeri Sembilan, Perak and to a lesser extent, Selangor, will need more time to raise their respective profiles and to exert their influence within their own states.

Post-Sandakan, Warisan and Harapan are in an advantageous situation to consolidate their popular support in the face of a weakened opposition.

The ability to deliver on some of the key promises pre GE14 – infrastructure, energy and jobs – will most likely allow both to capture a sizable majority of seats in Sabah in the next general election.

A similar formula of better and higher paying jobs, a vibrant economy and an improved delivery mechanism can give Harapan an advantage in Peninsular Malaysia, overcoming some of the racial and religious rhetoric being spewed by Umno and PAS.

This has to be complemented with firm and focused leadership on the part of Harapan leaders.

Sandakan is a welcome respite for the ruling coalition, and the road ahead seems a little brighter, but a lot more work needs to be done as Harapan begins its second year in government.

ONG KIAN MING is the MP for Bangi.