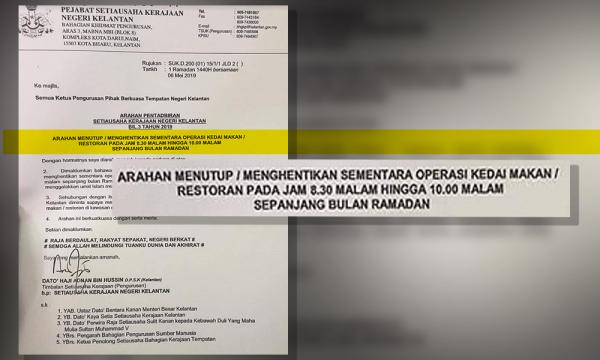 The notice issued to eateries to close business from 8.30pm to 10pm during Ramadan was just advice and not an order, says Kelantan Menteri Besar Ahmad Yakob.

This comes after business operators reportedly voiced their opposition to the move.

Ahmad was quoted as saying by Harian Metro today that a new notice has been issued by local authorities.

"We urge the people to respect prayer times. If they cannot, we will give (them a) chance. Next year, we will improve again," he said.

"The notice has been changed (to) a form of advice instead of instruction... (Please) refer to the latest letter (notice) issued by the local authorities."

It was previously reported that eateries throughout Kelantan were ordered to cease operations during this period.

The original instruction was issued by the state secretary via a notice dated May 6, and was aimed at encouraging Muslim to perform the tarawih night prayers at mosques or surau.

Many operators who were later interviewed disagreed with the instruction. They contended it was a drastic move, saying that staff who work in these eateries have a bigger responsibility to provide for their family.

They also asked why only eateries had to close, while other businesses were allowed to remain open.