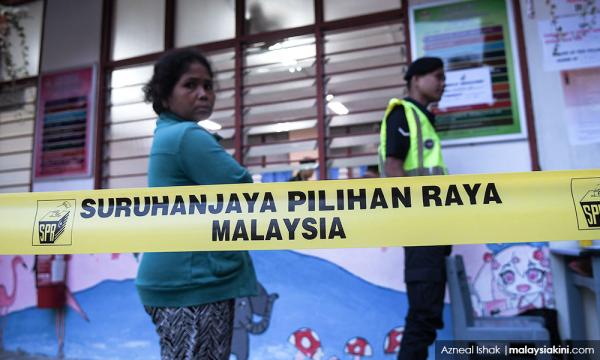 The outcome of GE14 proved that, despite high levels of boundary rigging and polling day malpractices, an electorally aware population can overwhelm all electoral odds.

After the dust of GE14 had settled, noticeable changes in the electoral mood became visible during a string of by-elections. The leadership change at the Election Commission and the inclusion of NGOs like Tindak Malaysia have allowed the evolution of democratic reforms.

Reflecting upon the first anniversary of the historic general election, we from Tindak Malaysia would like to share with readers our journey along this exciting road.

Before looking forward, it is important to step back in time and understand what Tindak Malaysia had faced previously.

Formed around the time of the then-watershed GE12, which began the change process, Tindak Malaysia is a loosely held electoral reform NGO, comprising professionals from many fields.

Our volunteers studied election laws and created role plays of electoral scenarios to enable volunteers to understand the polling processes. They were taught how polls should be properly conducted.

The volunteers then trained trainers, crisscrossing the country to reach a wider audience in preparation for GE13. The Paca training was conducted in various languages to cater to participants.

These training methods laid the foundation for the many Paca groups that sprouted everywhere in preparation for GE14. In many polling stations, trained Paca were able to stop counting malpractices and saved the elections.

However, our analysis showed that no matter how well the Paca guarded the process, the election outcome was predetermined by unbalanced electoral boundaries.

From 2011, a small group of volunteers with technical backgrounds began to explore the delineation of constituencies.

Politically biased delineation is a decades-old issue. We wanted to empower the electors to object meaningfully during the forthcoming redelineation exercise.

As such, we initiated the first-ever civil society effort in digitising nearly 8,000 polling districts, which are the building blocks for constituency formation. We analysed existing irregularities and proposed new, balanced boundaries.

In 2014, together with the Malaysian Bar, we organised a forum to engage the legal fraternity in order to mobilise expert help in preparing objectors for the upcoming redelineation exercise.

From the outset, we emphasised the significance of malapportionment (unbalanced constituency size), and not gerrymandering (irregular constituency boundary) as the primary issue.

Despite our groundbreaking efforts, the grossly imbalanced redelineation was bulldozed through Parliament before the elections deadline.

Nevertheless, the experience ignited enough public interest to impact the pre-election conversation and somewhat neutralise the imbalances of the redelineation.

Even before GE14, we were looking into electoral reforms in order to stop malpractices and ensure the independence of the EC.

In 2013, we reviewed the constitution and election-related legislation and proposed amendments to tighten rules and remove loopholes.

This proposal, which we named the Malaysian Electoral Reform Programme (Merp), was submitted to both the prime minister and the opposition leader. Of course, nothing came of that.

Following the change of the federal government in 2018, our findings were presented to those persons charged with reforming the system. These included the Institutional Reform Committee (IRC) in May 2018 and Electoral Reform Committee (ERC) in February 2019.

We are satisfied that all of our work with Paca and redelineation has yielded fruit in GE14 and now, with Projek Beres, we anticipate further reforms.

The new federal government has revamped the top leadership of the EC. This is a major step in the reform of a severely defective institution. No longer seen as an adversary, we now work with the EC on electoral reform.

For the first time, we were invited to be observers in the Cameron Highlands by-election. After that, we were asked to nominate presiding officers (ketua tempat mengundi) for later by-elections.

We have also participated in NGO-level discussions on election offences, electoral roll discrepancies and issues with delineation.

One big challenge is the grossly imbalanced delineation of 2018 that has been gazetted and will stand for eight years.

Having conducted redelineation research since 2011, we have raised our concerns with the EC.

The biggest concern is the gross malapportionment, resulting in severely overpopulated seats like Rantau and Sandakan.

The Federal Constitution offers no recourse, since the clause controlling allowable seat size variation has been removed, leaving only the vaguely worded statement that the “number of electors within each constituency in a State ought to be approximately equal”, which is subject to interpretation.

The requirement that “regard ought to be had to the inconveniences attendant on alterations of constituencies, and to the maintenance of local ties” is also open to argument and does not offer firm guidelines.

While the EC has started looking into the matter of redelineation, a revision can only be made before 2026 if the number of parliamentary and/or state seats is changed through constitutional amendment.

One of our proposals to EC is to investigate whether the constituencies have sufficient facilities to conduct voter registration and polling. We have identified some constituencies that have violated this constitutional requirement.

For example, during the Semenyih by-election, voters in Kajang Prison had to travel outside of their constituency and into a neighbouring parliamentary seat to cast their vote.

Some voters whom we interviewed during the observation programme complained of difficulties in accessing the polling station.

Similarly, for the Sandakan by-election, voters of Sim-Sim are required to vote in a polling centre located in a different constituency. We expect there will be other such challenges.

We have suggested to EC that this could be used as the basis to conduct an early redelineation.

In Sabah, additional state seats were gazetted, but have not been defined in the current delineation. This means the last gazetted redelineation in Sabah was in 2003. A new redelineation can therefore be conducted, during which issues of malapportionment can be addressed.

Zeroing in on polling districts

We have discovered that the building blocks of a constituency, the polling districts, are key to the problem. We believe that if the definition of polling districts can be controlled, malapportionment and gerrymandering will become very difficult.

Some polling districts, especially in the urban areas of Selangor and Sarawak, are overpopulated and add to the overpopulation of state and parliamentary seats, which results in malapportionment.

For example, Kuala Baram in Miri, which is the largest polling district in the country, has a bigger population than Igan, which is Malaysia's smallest parliamentary constituency in terms of electorate size.

Given the poor geographical correlation between polling districts and polling stations, the allocation of polling stations in Rantau and Semenyih resulted in crossed paths and traffic jams which hindered the polling process during the respective by-elections. We expected the same in Sandakan.

Our suggestions to the EC, IRC and ERC are:

We have suggested to the EC that a review of polling districts can be conducted immediately since it requires no constitutional amendment.

Once the polling districts are rectified, the EC can confidently delineate constituencies that will fulfil all constitutional requirements. The EC has reacted positively to our previous contributions and we await their final decision on this.

The enthusiasm following GE14 and the refreshing changes within the EC were very heartening to our volunteers.

However, there are still challenges to be faced along this bumpy road.

One big challenge is the bureaucracy of the EC. The top layer has been refreshed, but the lower ranks are still mired in the old bureaucratic procedures.

For example, after our volunteers were appointed as presiding officers, sudden changes were made to the final appointments without sufficient communication. We had to scramble to deploy people who were able to absorb the changes.

This was a surprise, since the very same bureaucrats had engaged well with us in discussions about the election process and voter registration.

The second challenge comes from the Malaysian public. The wave of enthusiasm that was generated before, during and immediately after GE14, has dissipated.

We realised this when our calls for observers in the Cameron Highlands, Semenyih and Rantau by-elections didn’t attract even a single sign-up from people outside of our group.

Having delivered GE14, the public are now sitting back to enjoy the fruits. They have failed to understand their ongoing role in the evolution of democratic reform.

We have managed to expand our participation in the observer programme. We hope the public will at least support the effort to clean up the electoral roll.

We are witnessing a dramatic overhaul of our election system. We now have a credible EC that, having won public confidence, is spearheading reforms.

We, in Tindak Malaysia, are honoured to be part of these electoral reform activities.

While redelineation may take time, other reforms are ongoing. We will continue to work with all groups and contribute our best to a cause that will mature our elections process and allow us to elect a government we deserve.