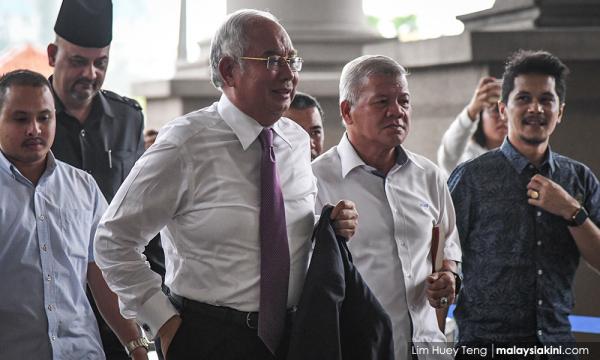 4pm - Thank you for following our live report today.

3.38pm - Lead defence counsel Muhammad Shafee Abdullah requests a later start for the SRC International hearing tomorrow, as the defence has to be at the Court of Appeal for a decision on a matter related to former premier Najib Abdul Razak’s 1MDB trial.

The hearing normally starts at 9am.

Shafee tells Justice Mohd Nazlan Mohd Ghazali that the Court of Appeal will deliver its decision on the defence's appeal to disqualify former Federal Court judge Gopal Sri Ram from leading the prosecution in 1MDB’s case.

"Najib also needs to be there," he said.

The judge then asks Shafee how long the matter will take. The lawyer replies that the decision is expected to be delivered when court begins at 9am, and that the defence will head to the Kuala Lumpur Courts Complex to attend the SRC International hearing right after that.

The judge then schedules the hearing to begin tentatively at 10am tomorrow.

3.20pm - Witness Norhayati Mohd Yunus says she does not know whether the money involved in transfers from Gandingan Mentari to Ihsan Perdana came from SRC International.

Norhayati, who is the manager of Affin Bank's Curve branch in Petaling Jaya, was responding during cross-examination by Najib's defence counsel Farhan Read.

"Puan, do you know whether the source of the money was from SRC International?

"I do not know," replies Norhayati.

The court had heard previous testimonies from bankers on money from SRC International flowing into Gandingan Mentari's account, before being transferred into Ihsan Perdana's account.

Gandingan Mentari was an SRC subsidiary, while Ihsan Perdana was the corporate social responsibility arm of SRC.

Farhan asks Norhayati to confirm that the transfer, which involved seven cheques amounting to RM5 million each, took place within one day.

All seven cheques were issued on Jan 13, 2015, according to submissions by lawyer Farhan Read.

After that was established, Farhan wants to know if the authorities - Bank Negara and the MACC - quizzed her before or after the general election last year.

All the questioning took place before the elections, says Norhayati.

So far, nothing else has been disclosed about Mail Global Resources.

The transfers, she says, occurred between December 2014 and February 2015.

Ihsan Perdana was the corporate social responsibility arm of SRC.

Norhayati, the manager of The Curve branch of Affin Bank, says that based on bank documents, RM40 million was transferred to Ihsan Perdana from Gandingan Mentari on Dec 24, 2014, RM5 million on Feb 5, 2015, and RM5 million on Feb 6, 2015.

This tallies with previous testimonies with regard to the RM50 million money trail from Gandingan Mentari to Ihsan Perdana.

Shamsul emerges from the witness room and looks calm when identified by Norhayati. He then temporarily gives his identification card to judge Mohd Nazlan Mohd Ghazali.

After being identified, Shamsul walks back into the witness room.

Norhayati is the manager of Affin Bank’s branch at The Curve, Petaling Jaya.

Earlier, she testified that Shamsul was one of Ihsan Perdana’s two authorised signatories, who were able to transfer money from its Affin Bank account.

The other authorised signatory for Ihsan Perdana's Affin Bank accounts is one Abdul Aziz Ismail.

It was reported in 2017 that the 1MDB special task force arrested Shamsul as part of a probe into the troubled state fund.

Norhayati says that there was then a RM5 million transfer from the same Affin Bank account to Najib's AmBank account ending in 906 on the same day.

She testifies that another transfer of RM10 million from the Affin Bank account to Najib's AmBank account ending in 880 occurred on Feb 10, 2015.

Ihsan Perdana, she adds, has three current accounts with The Curve branch of Affin Bank.

Ihsan Perdana was previously known as Gem Horizon Sdn Bhd before it changed to its current name.

Shamsul Anwar is the managing director of Ihsan Perdana.

'I was under pressure to expedite SRC loan'

10.34am - "I was asked by management to expedite the application," says witness Amirul Imran Ahmat, adding that he was under pressure to prepare investment papers for the KWAP board on the loans to SRC International.

"There were a few meetings within a short span of time. Usually, if I miss one meeting, I can go for the next one. But here, I have to rush to every meeting.

"There was a lot of pressure to expedite the whole matter," he tells the court.

Judge Mohd Nazlan Mohd Ghazali allows for the witness to be called back at a later date for cross-examination by defence counsel Harvinderjit Singh (photo).

The judge allows the application by Najib Abdul Razak's lead counsel Muhammad Shafee Abdullah to postpone the cross-examination, as Harvinderjit is absent from today's proceedings due to food poisoning.

The prosecution raises no objection.

'KWAP only received a quarter of documents requested from SRC'

10.32am - Witness Amirul Imran Ahmat tells the court that he only received about a quarter of the documents requested from SRC International when preparing the approval for its loan applications.

Amirul says under examination from deputy public prosecutor Ishak Mohd Yusoff that he had to rely on whatever he received from SRC International to prepare the investment papers to be presented to KWAP's investment panel.

Ishak: Looking at the email exchanges as per your witness statement, you applied for a lot of information (from SRC International). Did you receive them?

Amirul: I receive some, not all.

Ishak: In percentage, how much did you receive in estimation?

Ishak: So you had to act based on this 25 percent?

KWAP then agreed to SRC International's second application for RM2 billion, he adds, bringing the total to RM4 billion.

10.12am - Witness Amirul Imran Ahmat (photo) tells the court that the RM4 billion loan given out by KWAP to SRC International is the biggest he has ever seen throughout his service.

Amirul then wraps up reading from his witness statement.

Amirul testifies that Najib signed the letter in his capacity as then-prime minister and finance minister.

9.34am - Amirul says that on March 22, 2012, he received an email from SRC International director Nik Faisal Ariff Nik Othman Ariff Kamil to the KWAP CEO stating that Najib had made a decision on the additional RM2 billion loan.

The witness testifies that he was ordered by then-superior Ahmad Norhisham Hassan to prepare a 'surat pekeliling' (circular) on the loan.

"It is to be one lump sum, based on discussion with the prime minister," he says.

Amirul adds that Najib was the chairperson of 1MDB's board of advisers, in relation to the panel investment paper he prepared for the loan.

9.16am - Witness Amirul Imran Ahmat testifies that on Mar 14, 2012, he received an email from former 1MDB finance director Terence Geh requesting approval to obtain further financing of RM2 billion, which was to be secured by a government guarantee.

Under examination by deputy public prosecutor Ishak Mohd Yusoff, the witness says that he received the resolution from SRC International's board of directors authorising the additional RM2 billion loan.

9.07am - Najib enters the dock as judge Mohd Nazlan Mohd Ghazali makes his way into the courtroom for the examination of 29th witness Amirul Imran Ahmat (photo).

9am - Wearing a blue suit, Najib Abdul Razak enters the courtroom and takes a seat at the front row of the public gallery.

His lead defence counsel Muhammad Shafee Abdullah is also seen entering with other members of the defence team.

Attorney-General Tommy Thomas is also seen taking his seat and conferring with other members of the prosecution team, including deputy public prosecutor V Sithambaram.

The trial, which is being presided over by judge Mohd Nazlan Mohd Ghazali, is set to kick off at 9am.

He said that KWAP management had considered SRC International's loan applications without any supporting documents.

The application was received through a letter dated June 3, 2011, which was signed by SRC International director Nik Faisal Ariff Nik Othman Ariff Kamil.

Amirul told the court that the letter also contained a handwritten and signed note by Najib, which stated that he “agreed with KWAP giving the loan to SRC.”

The witness said he had then sent a request to Nik Faisal to provide the necessary documentation, including 1MDB's audited accounts, company profile, and the latest management accounts.

Amirul said a series of emails then ensued between him and his then-superior Ahmad Norhisham Hassan (now deceased), as well as Nik Faisal and his assistant Noor Azlina over further requests for more documents on SRC International and 1MDB.

The documents, however, were never delivered despite the promises made by Noor Azlina and Nik Faisal.

The court had previously heard that a total RM4 billion was transferred from KWAP’s account to SRC International’s Ambank accounts between August 2011 and March 2012.