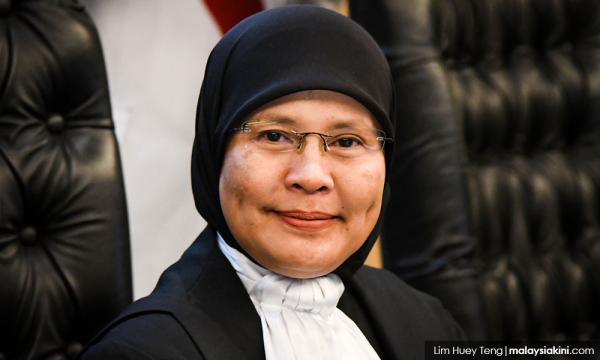 YOURSAY | ‘Recreate the Palace of Justice - not the edifice, but the office.’

Toffeesturn: Tengku Maimun Tuan Mat, may God be with you in your duties as the chief justice of Malaysia. May you be guided by the highest principles that this office demands, and that you carry out your duties without fear or favour.

I wish you will set the standards by which other women of Malaysia will be accorded the highest respect in this our beloved country, and that you will lead the way for higher achievements for women in this country. Possibly, the office of the prime minister will be filled by a woman one day.

We will pray for you not because you are a woman, but because you hold a heavy and ever so important office - the office of justice. We also pray that during and after your tenure, every Malaysian will feel confident that he or she will receive justice from our courts, regardless of race or creed.

Recreate the Palace of Justice - not the edifice, but the office. God bless you, and congratulations.

Ocean Master: This is a proud day for women of all colour and creed in Malaysia, as well as for all Malaysians.

History has been made. It is not just because of the rise of the fairer gender, but because Prime Minister Dr Mahathir Mohamad was able to move this appointment through the Conference of Rulers.

I wish Tengku Maimun all the best in her role. Malaysians who care for our beloved nation and its future are all behind you. God bless.

Fairview: Indeed, this appointment has far wider significance than just for the judiciary. It sends a signal that the new Malaysia will not discriminate against its citizens based on gender, as dictated by conservative religious sentiments.

It encourages women to pursue whatever career they choose, and not be bound by gender prejudices and religious dogmas. It’s a great day for our womankind.

Starwars: Tengku Maimun is one woman who is steadfast and principled in carrying out her duties. Colour, race or religion is never a consideration.

Even your political leaning, whether right or left, is never a consideration. Poor or rich, you get the same kind of treatment. That is the Tengku Maimun I know as a lawyer.

Anonymous_1545691035: Tengku Maimun, please help to clean up our judiciary and make it shine again.

Get rid of those ‘hakim kangkung’ and put in place righteous judges so that we can be proud of our judiciary system once again, like how it was in the 60s and 70s.

No Fear Nor Favour: Congratulations Tengku Maimun, lead the path of righteousness and re-establish the integrity of the judiciary system. May your tenure as the chief justice be a glorious one. God be with you.

Fair Play: Mahathir, this is indeed the way forward for our country.

The appointment was made in accordance with the constitution on the advice of the prime minister by the Agong, after consultation with the Conference of Rulers. The nation now has a long-tenure CJ who will serve for the next six plus years.

Dahjadi Bubur: Congratulations, your honour. I am so glad and happy for the nation that you have been given this opportunity to restore a fragment of pride for this nation. Please don't disappoint.

Kind Soul: Her Ladyship’s decision in one Sisters in Islam case was encouraging. I hope Muslim women can expect a better future with Tengku Maimun at the helm.

Gerard Lourdesamy: A Daniel come to justice. An independent and upright judge. Sound in the law. Full of wisdom and integrity. The constitution is in safe hands.

Clever Voter: For a long time, the country has witnessed its early promises evaporate before real change could take place.

The appointment of Tengku Maimun as chief justice represents a new chapter for the history of the judiciary. The judiciary has not quite recovered from a series of incidents involving bad publicity due to its close association with the corrupt past regime.

It is time the new chief justice puts this right, and remains impartial, upholding the constitution and the spirit of fairness, justice, and objectivity. It is also timely that we experience a change in having a woman to lead the judiciary, which is a milestone in our history.

David Dass: This is a great moment for the judiciary and for the country. There are no limits to what women can achieve.

It is good that the king and the Conference of Rulers gave their royal assent to the appointment of Tengku Maimun as chief justice of Malaysia. By all accounts, she is eminently qualified for the position.

Rupert16: An excellent decision by the Pakatan Harapan government. It’s a good time to show the bigots and misogynists in our midst that women are as capable as the men, and should not be treated like dirt. Thanks be to Allah.

Malaysian-United: Yes, a victory for gender equality in the workforce. Let's hope we get to the stage where we shed all forms of discrimination in the workplace, academia, sports, et cetera.

Only then can we be assured of getting the best people in their respective areas of expertise.

Bill Price: Many of the commenters here are congratulating the government on the new CJ pick because she is a woman. They are celebrating their perception of the 'in your face' nature of placing a Muslim woman in this position.

Now, to be fair, we have not heard anything from the religious warlords about how choosing a woman for this position is wrong or somehow attacks Islam (I suspect we might but we haven't yet).