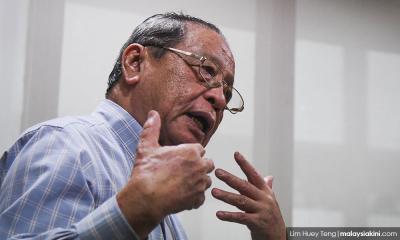 Prior to the last general election, Lim Kit Siang was the most productive lawmaker on both sides of the political divide in terms of generating media statements on current issues.

After the polls, he trained his guns on Najib Abdul Razak, prompting the former premier to urge the DAP veteran to end his obsession after noting that in the month of July 2018 alone there were 26 statements critical of him.

However, Lim countered that his obsession was with the 1MDB scandal, for which Najib is now facing a slew of charges.

In recent months, the Iskandar Puteri MP has remained out of the media radar.

And in a media statement this evening from Sandakan, Sabah, where he is campaigning for DAP candidate Vivian Wong in the upcoming May 11 by-election, Lim commented on his silence

One of the reasons for keeping a low profile, according to him, was the allegation that he was the puppet-master pulling the strings of Prime Minister Dr Mahathir Mohamad and the cabinet.

Describing this as a “monstrous lie”, he said: “We live in an unprecedented era of lies and falsehoods – thanks to the advent of the Internet and the social media.”

Lim said he had recently seen two WhatsApp images - one portraying him as a puppet-master pulling the strings of puppets signifying PKR, Bersatu and Amanah while the other showing him as lording over and censuring Mahathir, Deputy Prime Minister Dr Wan Azizah Wan Ismail and Defence Minister Mohamad Sabu, pictured in submissive poses.

In the images, Lim said he was laying down the dos and don'ts such as not wanting to see the Malays becoming united, among others.