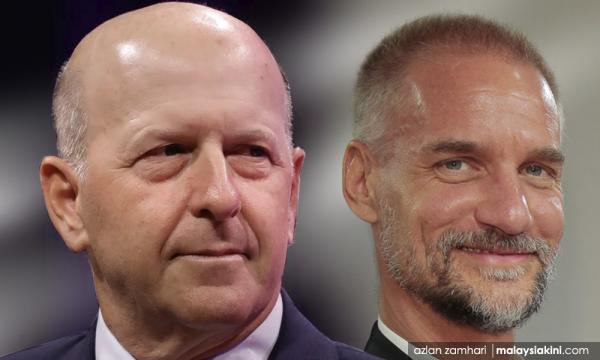 'We own that, that’s on us’ - Goldman Sachs on 'criminal' Tim Leissner

Global investment bank Goldman Sachs has been grappling with how it hired and promoted a “criminal” like its former partner Tim Leissner (above, right) who has pleaded guilty to money laundering charges in the US over his role in the 1MDB affair.

However, CEO David Solomon (above, left) revealed that the bank had yet to discuss any guilty plea with the US Department of Justice (DOJ) to resolve its own part in the scandal.

In an interview with US business news channel CNBC, Solomon stressed that the bank was trying to learn from its recruitment mistakes and move on from 1MDB.

“We are spending a lot of time being reflective and really thinking about how it was that we wound up having somebody we hired at the firm, promoted at the firm, became a partner with the firm and turned out to be a criminal.

“We are working as diligently as we can to put it behind us and move on and stay focused on our clients and businesses,” Solomon was quoted as saying.

Leissner had previously overseen Goldman Sachs’ Southeast Asian operations and was charged by the DOJ last year for money laundering and bribery in connection with 1MDB. He eventually pleaded guilty to the criminal charges and was required to forfeit US$43.7 million.

Leissner has also been banned from working in the banking industry in the US and in Singapore.

In a separate interview with Bloomberg, also yesterday, Solomon again stressed that the bank was “very focused” on moving on from the 1MDB scandal.

When asked if he expected US prosecutors to compel the bank to plead guilty over its role in 1MDB, he denied that such discussions had been held with the DOJ.

“We made a statement last week that we don’t think that is warranted by the facts or the law but I am not in a position to comment on that.

“Because we haven’t even started discussions with the (US) Justice Department about any of that. So to speculate or even comment on that, that just doesn’t seem right,” he answered.

The Financial Times previously reported that DOJ staff had made an internal recommendation that Goldman Sachs plead guilty as part of a potential settlement over its role in the 1MDB scandal.

Thomas also revealed the bank had received higher than usual fees from these transactions and had rewarded Leissner and Ng for orchestrating them.