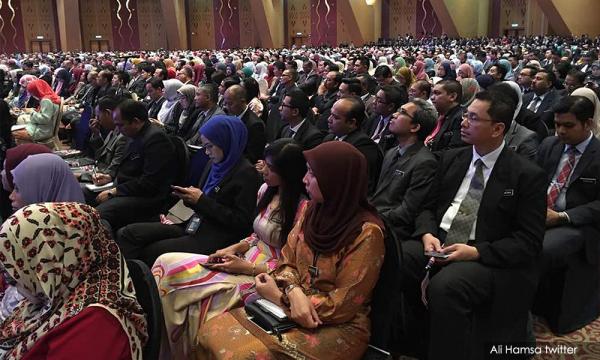 COMMENT | The civil service makes up the backbone of a nation. It is imperative for civil servants to develop a culture that will pave the way for a dedicated, efficient and ethical service, marking the beginning of a new era of public governance.

It is also the responsibility of the civil servants to serve the government of the day and help the government deliver its pledges to the people besides maintaining political neutrality.

Those sabotaging the implementation of government policies and non-performing civil servants must go, while those with lackadaisical and clock-watching attitude need to be retrained to upgrade their skills.

As we know, more than about half of the 1.7 million civil servants – one for every 19.2 Malaysians – are teachers and nurses, as well as police and military personnel.

Those in the civil service should put their hearts and souls into their work and be highly committed. Because even one bad apple can spoil the whole bunch.

If its officers are lacklustre and corrupt, then the road to the success of the government will be arduous. Good working relations between Putrajaya and civil servants is crucial for Malaysia to overcome challenges.

Furthermore, they should remain relevant in the current work environment, have a more innovative mentality and brush up on their English language competency.

For departments with service counters, the heads of departments should ensure that at least one Chinese- and Tamil-speaking officer is placed.

Their pay, remuneration and pensions continue to soar, taking a big chunk from the country's national budget each year. The size of the civil service has grown too big and become worrisome for a very long time.

Recently, Prime Minister Dr Mahathir Mohamad said that the government was looking at the feasibility of privatising parts of the public sector in a bid to address its bloated size.

The downscaling of the civil service can be seen as a measure to reduce the financial burden while improving efficiency and quality of work, stimulating economic growth and improving the effective distribution of resources.

The government will not be sacking these civil servants, but transferring them to new corporate entities.

Meanwhile, the flexi-working hours, which allow for a balance between working hours and family time for government employees, are also intended to standardise the four types of staggered working hours. They just need to have nine hours clocked in to complete one working day.

Last year, the government axed 17,000 civil servants who were political appointees and contract officers of the previous government in a bid to reduce government spending.

Civil servants must continuously re-engineer and reinvent themselves with the focus on giving the best service to the public. They must be sensitive to all public e-mails, answer calls and complaints. They should be apolitical and do their best to serve the people.

Civil servants should walk the extra mile and strive towards achieving a graft-free civil service. Every government servant plays a special role in providing hope. Hence, it is vital for them to be subservient to the government.

Efforts should be made continuously through enforcement of regulations, instilling integrity and ethical values. Malaysia’s civil service – once highly regarded around the world – must regain its lost reputation.